American beaver have lived at the Vassar Farm and Ecological Preserve at least since 2012 and currently have two dammed ponds in the southern portion of the preserve, one of which is easily accessible via the Davies trail. Beavers generally live in family groups, with as many as three generations occupying a single pond. They make dams to create water deep enough to inhabit and do not live in the dam, but instead inhabit a lodge they construct in the resulting pond. In the process of damming ponds, beavers create habitat for many other birds and mammals, making them important animals known as ‘ecosystem engineers’. Beaver can get big- they are the second largest rodent in the world and sometimes weigh more than 50 pounds!

In order to prevent flooding of nearby trails and the town sewage line, the beaver dam requires some maintenance. The dam is partially broken regularly, as allowed by a DEC permit, to lower water levels, but is almost always repaired by the beaver within hours. Other devices to help alleviate water levels in the pond are also used as needed. It is important to remember that these management techniques are designed with the beaver’s best interests in mind, aiming to minimize damage and conflict while allowing the beavers to stay. 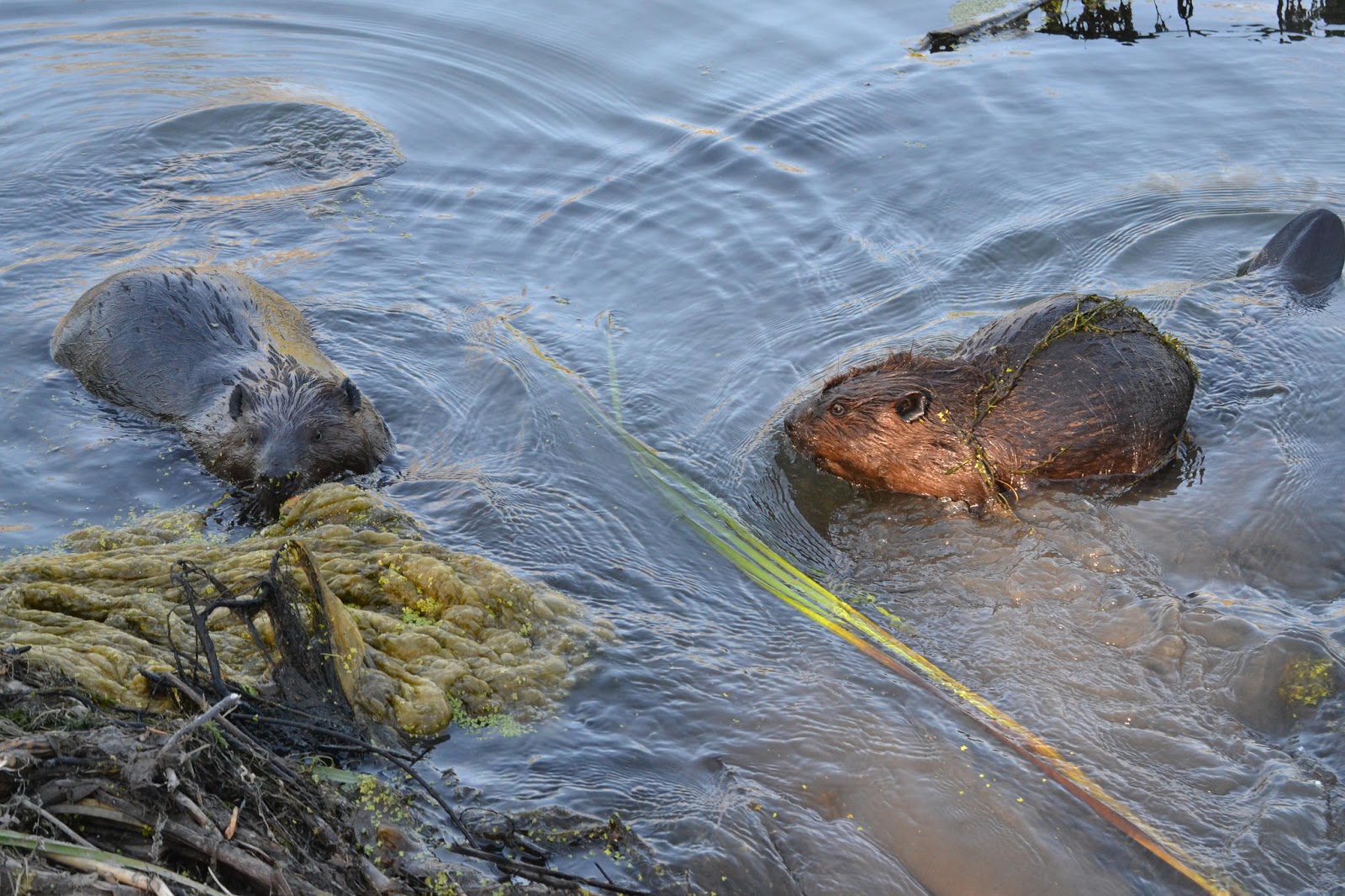 Many people are surprised to learn that we have bobcats at the preserve. They have been detected regularly on camera traps over the past few years and are even occasionally sighted. As many as two animals have been photographed at once, which is evidence that there is a breeding population in the area, not just the occasional passerby. Bobcats at the preserve have proven to be surprisingly diurnal, often being photographed on trail cameras during daylight hours.  While bobcats can occasionally take down large prey like white-tailed deer, they predominantly eat rabbits and other small prey items and should not be considered a threat to humans. Bobcats also seem less tolerant of urbanization than coyotes and generally avoid areas without forest cover. If you see a bobcat at the preserve, please let us know! 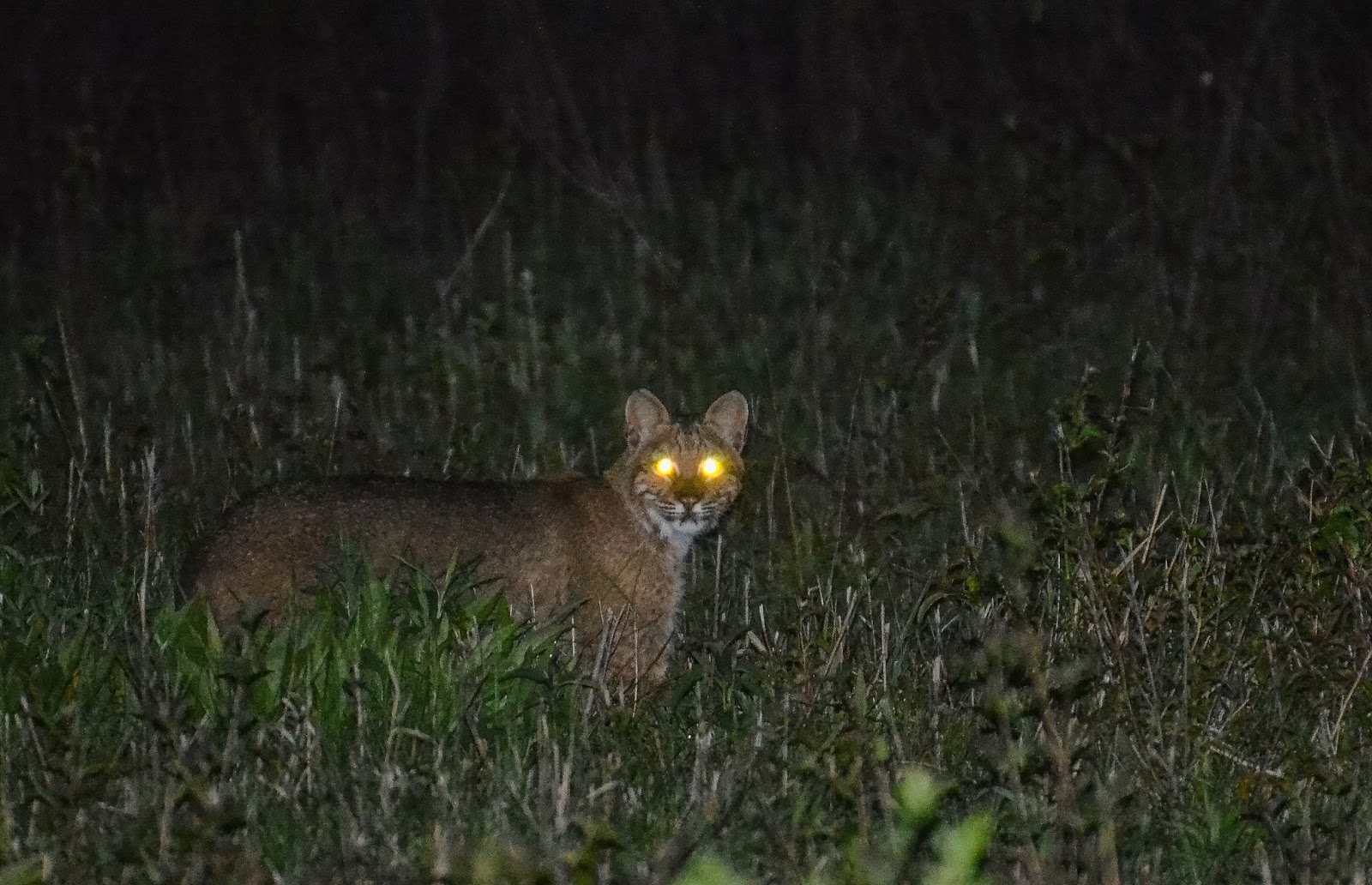 Unlike bobcats, eastern coyotes are social animals and predominantly live in family units. They are often heard calling at the preserve around dawn and dusk, with loud choruses making it sound like the woods are full of coyotes, when in reality it is just a few individuals. We have photographed as many as three at once on trail cameras. These predators are genetically different from coyotes in the west, containing some wolf and domestic dog genes. This means that ‘eastern’ coyotes are larger, and thus generally consume larger prey. There are documented cases of coyotes killing healthy, adult white-tailed deer, but coyotes do not have significant effects on deer populations. 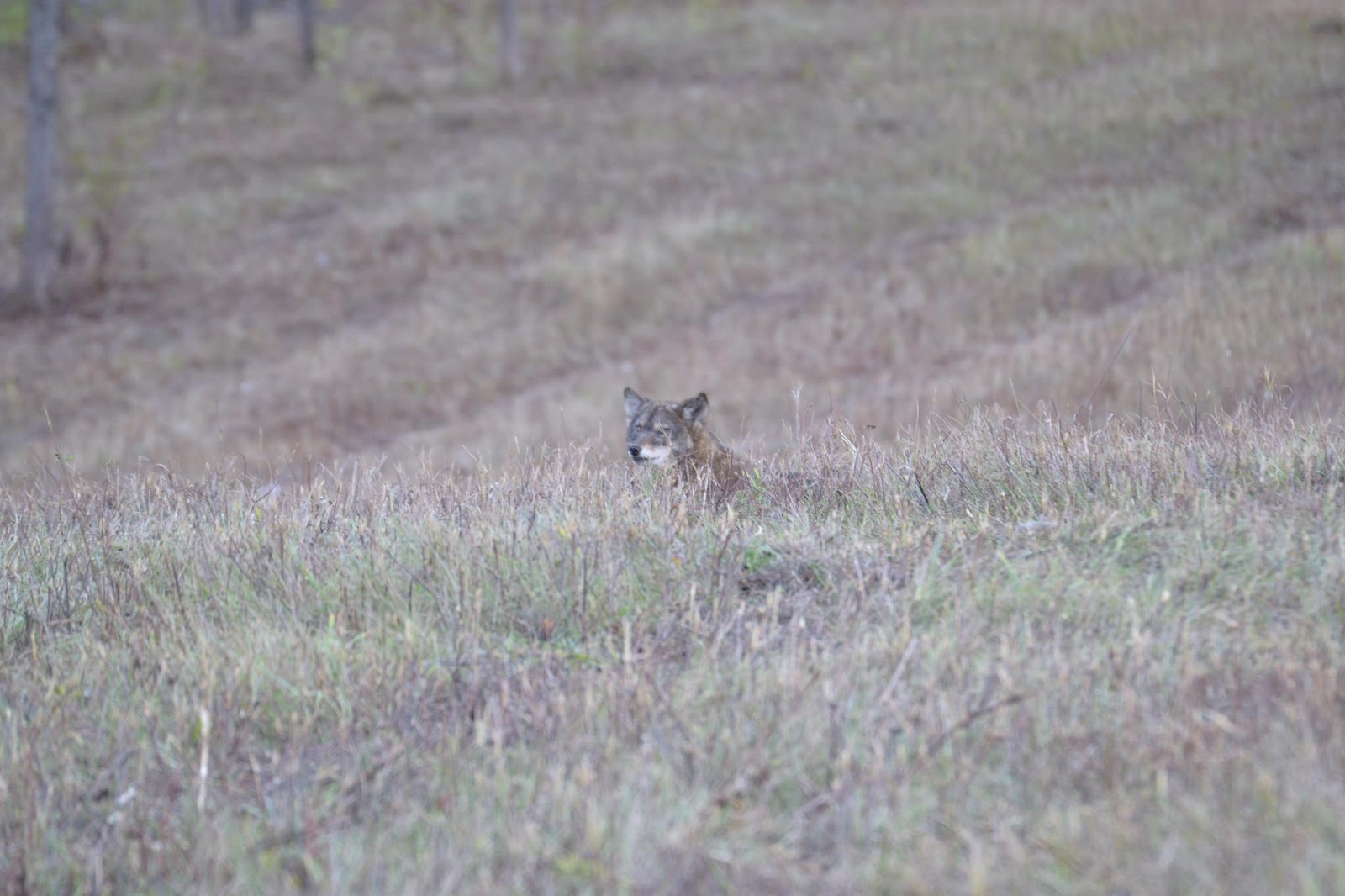 Barred owls are our most common owl in the Poughkeepsie area and occur throughout the Preserve, and in surrounding forested areas. Barred owls have successfully bred on the Preserve in the past, and generally prefer more densely forested areas of the preserve with large trees nearby. Barred owls eat a wide variety of small prey but are generally outcompeted or displaced where great horned owls occur. 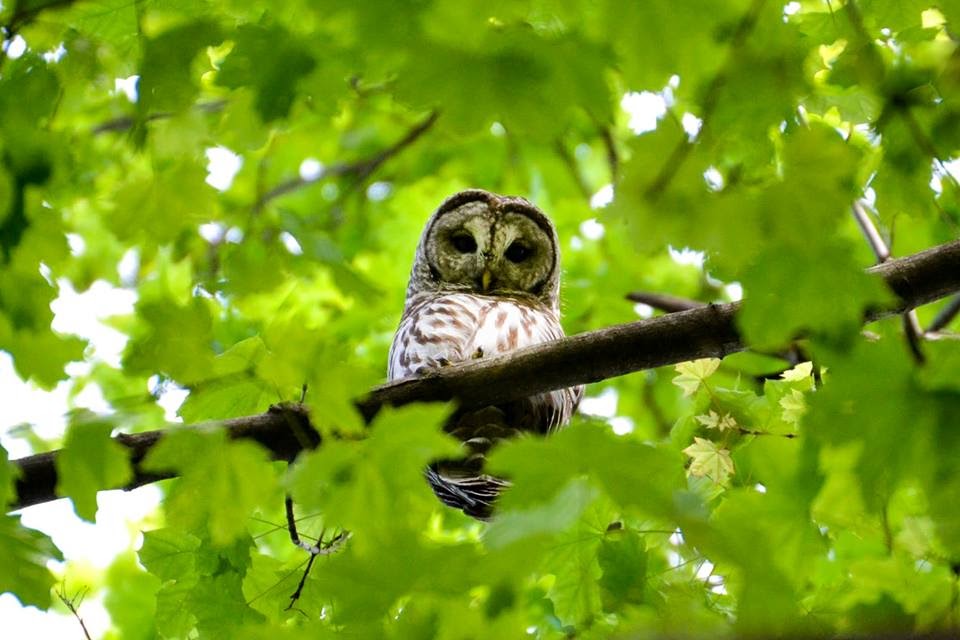 One of our most aggressive raptors, great horned owls will kill and eat a wide variety of prey, They eat small mammals and birds, but also hunt skunks, hawks, and occasionally other owls. Great horned owls have recently bred on the preserve and prefer a mix of broken and forested habitat. They are habitat generalists, and are not averse to urban areas. They are among the earliest nesters in the Northeast, and can be observed sitting on nests in the area as early as January. 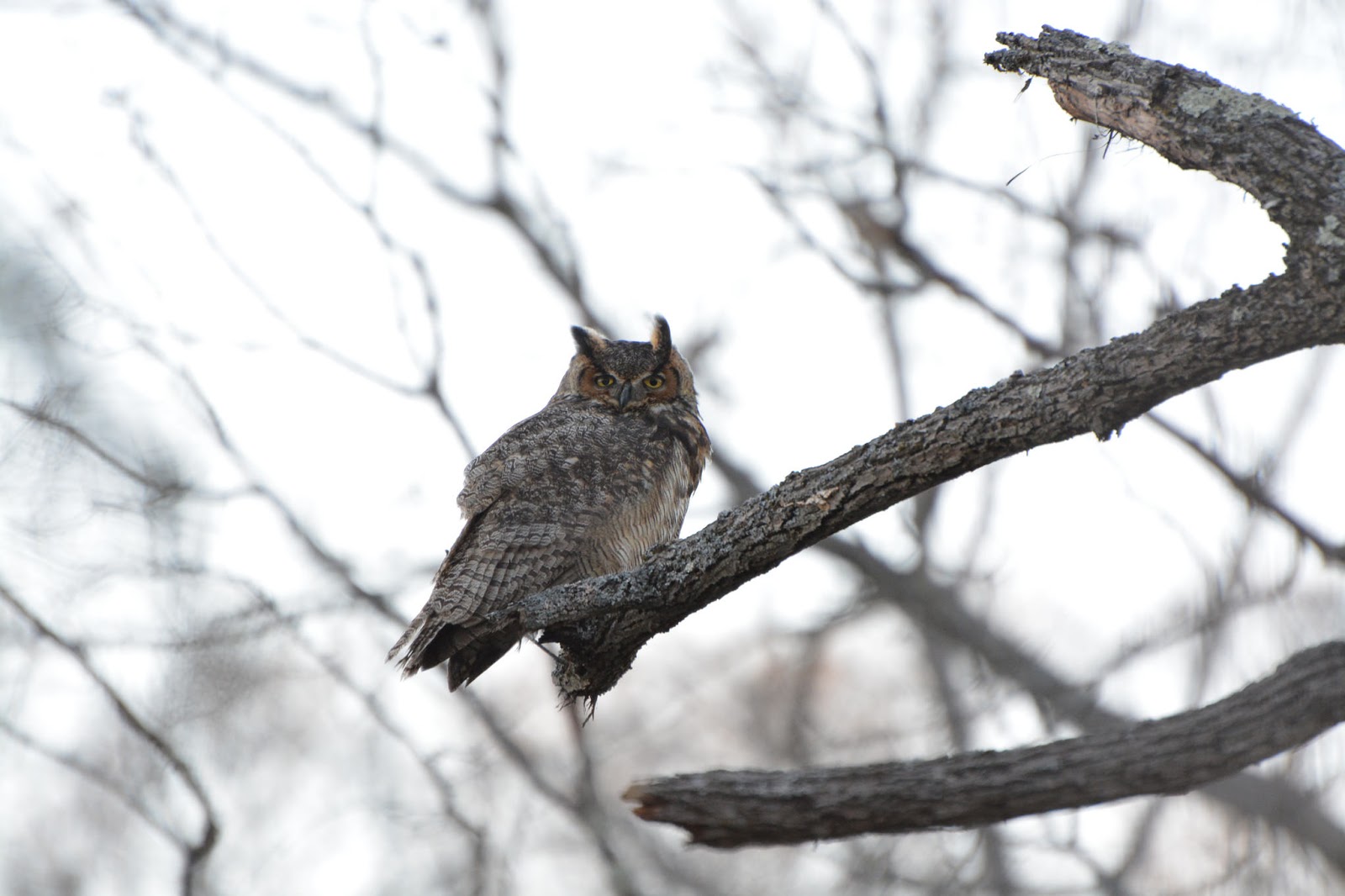 Shy and skittish, Wood ducks were once hunted to near extinction but have rebounded substantially. Many consider the wood duck to be one of the most beautiful ducks in North America, especially adult males in breeding plumage. There are multiple breeding pairs on the preserve now, especially in the beaver wetland complex in the southern part of the preserve. Wood ducks are tree cavity nesters, but also use nesting boxes. Large nesting boxes in the wetlands are meant for wood ducks. 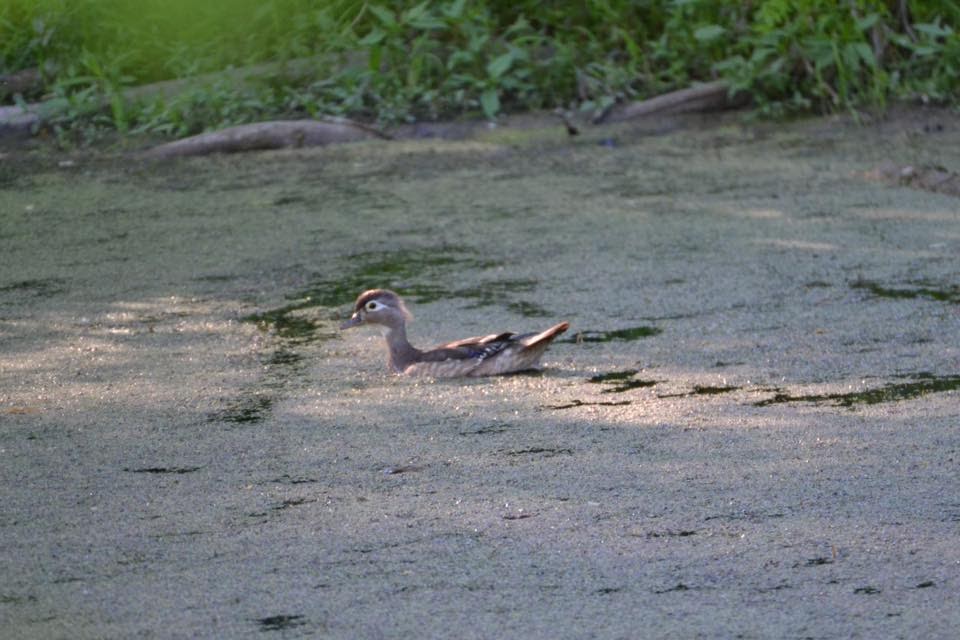 Voracious predators belonging to the weasel family, American mink are semi-aquatic and hunt a wide variety of prey. While they generally eat fish, frogs, and small mammals, mink are capable of taking down larger prey, and are the primary predators of muskrat. Mink have been seen uncommonly in all wetland areas of the preserve, as they are generally evasive and occur at low population densities. 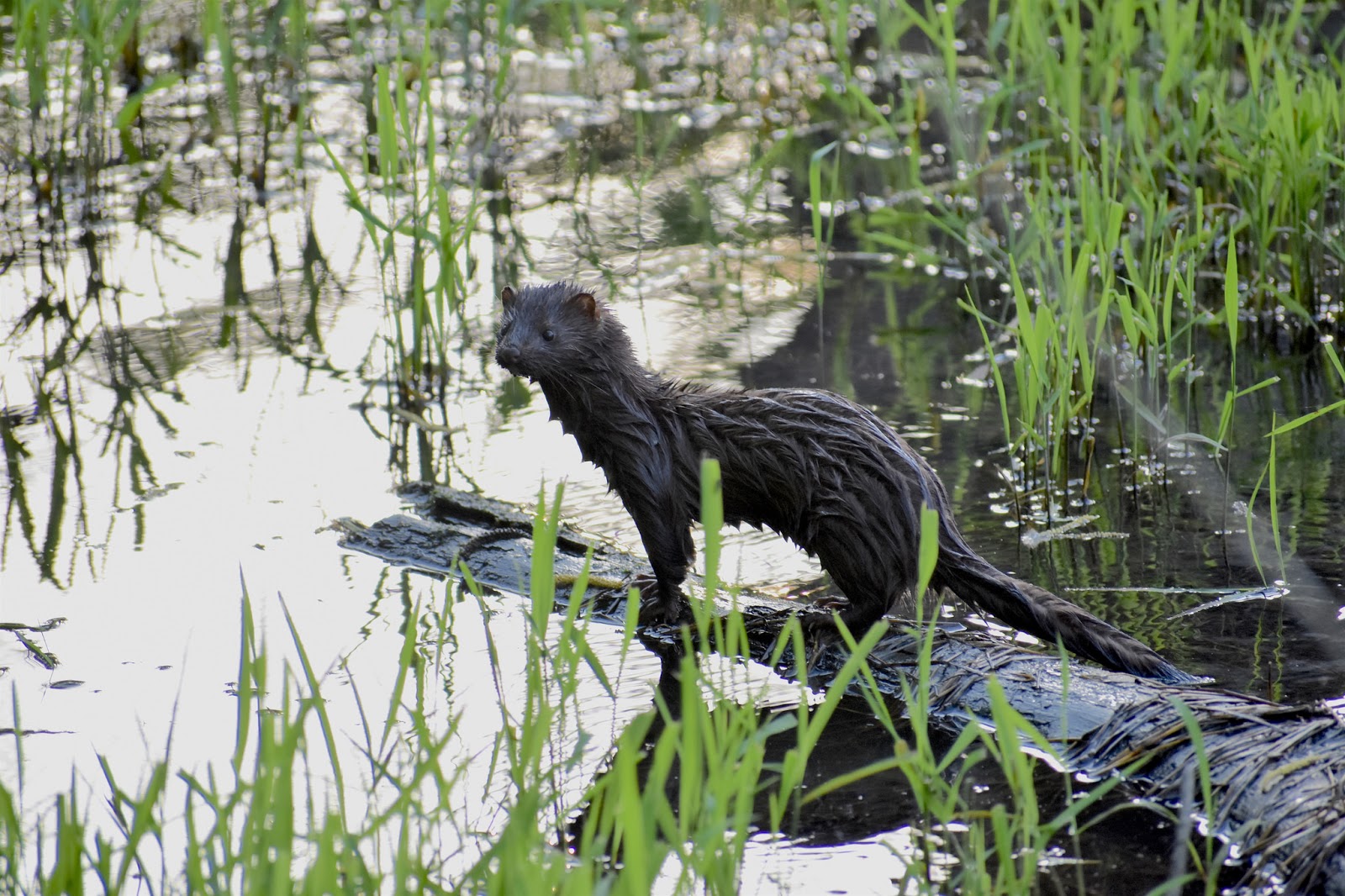 Fairly large semi-aquatic rodents, muskrats are often mistaken for beaver, but are much smaller and lighter and have straight, rat-like tails. Muskrats do not build dams, but often co-occur with beaver, sometimes even living inside beaver lodges. They also sometimes build their own lodges, usually out of leafy vegetation. Muskrats are important wetland herbivores, as they consume significant amounts of aquatic vegetation. This photo shows one of our muskrats on the beaver dam, showcasing its long claws. These claws are primarily used for digging burrows, but make for a good defense against predators. 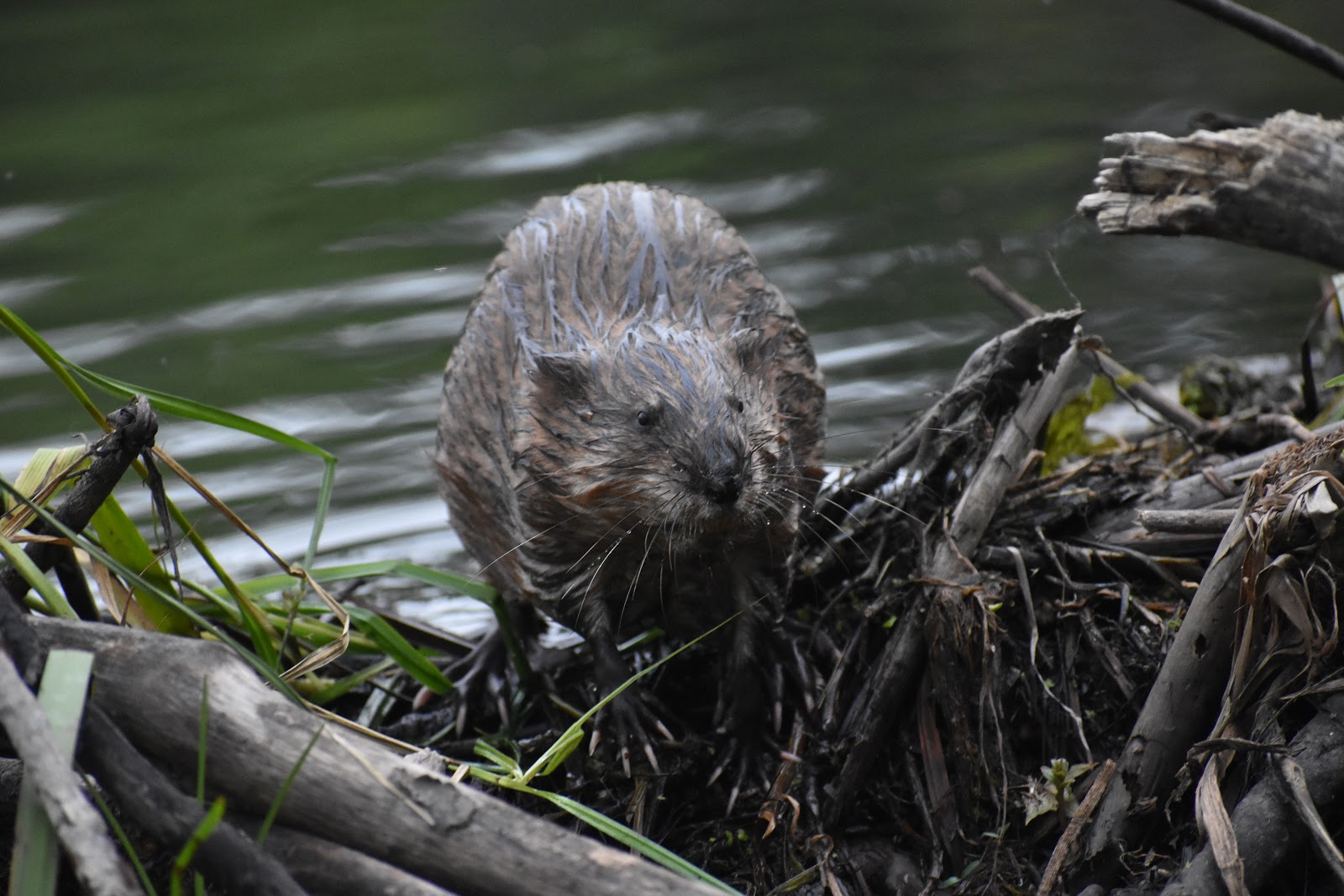 Threatened in NY State, the box turtle often occurs in fields and forested habitats, where it forages for berries and insects. They are extraordinarily long lived, usually living well over 50 years, and sometimes to a hundred years old. While box turtles generally have long lives, they face a wide variety of risks, such as strikes by lawnmowers or vehicles. Combined with a slow reproductive rate, this heightened anthropogenic mortality threatens box turtle populations. These turtles have been found throughout the preserve, and are sometimes observed along the farm road. 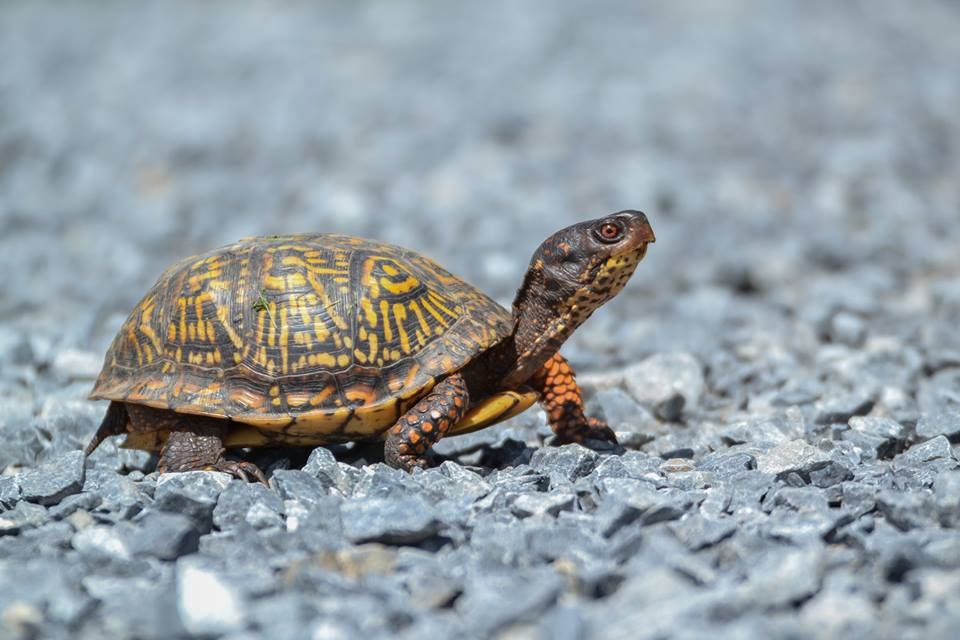 Nearly hunted to extinction, reintroduction efforts for wild turkey have been extraordinarily successful, and these birds are once again common in wooded areas. Wild turkeys are large birds that inhabit the forests and fields of the preserve. Turkeys are adequate fliers, and are sometimes observed roosting high up in trees, perhaps an anti-predation technique. 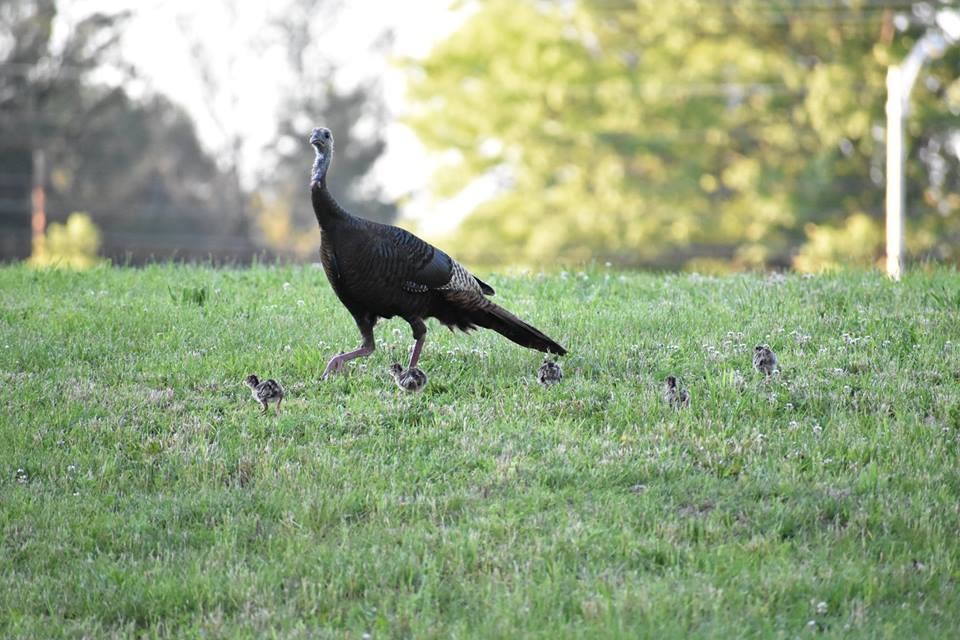 These small carnivores are common throughout the Vassar campus, including the Vassar Farm and Ecological Preserve. They predominantly eat small mammals and birds. Currently, work is being done to evaluate what role the presence of coyotes or gray foxes, both of which are common on the preserve, may have on red fox. 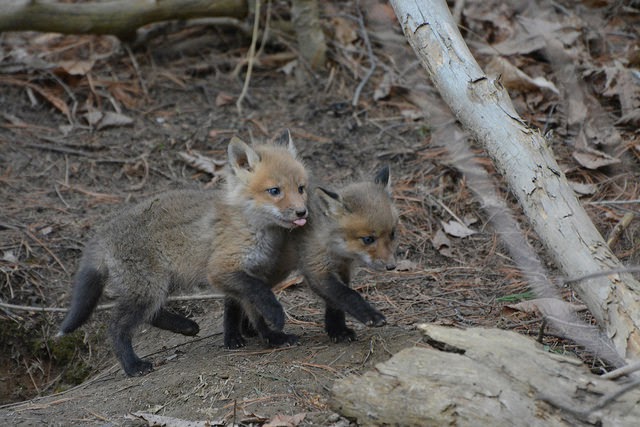 Our only native marsupial, Virginia opossums are common throughout the ecological preserve, seemingly preferring disturbed or urban areas. Opossums are defenders against Lyme disease. Work at the Cary Institute for Ecosystem Studies has found that opossums are resistant to Lyme disease and seldom contract or spread it. They also are excellent groomers, picking off and killing or eating ticks that attach to themselves, up to 5,000 in a single season. This highlights an importance of ecological diversity, as certain species can act as a barrier to disease spread where present or abundant. 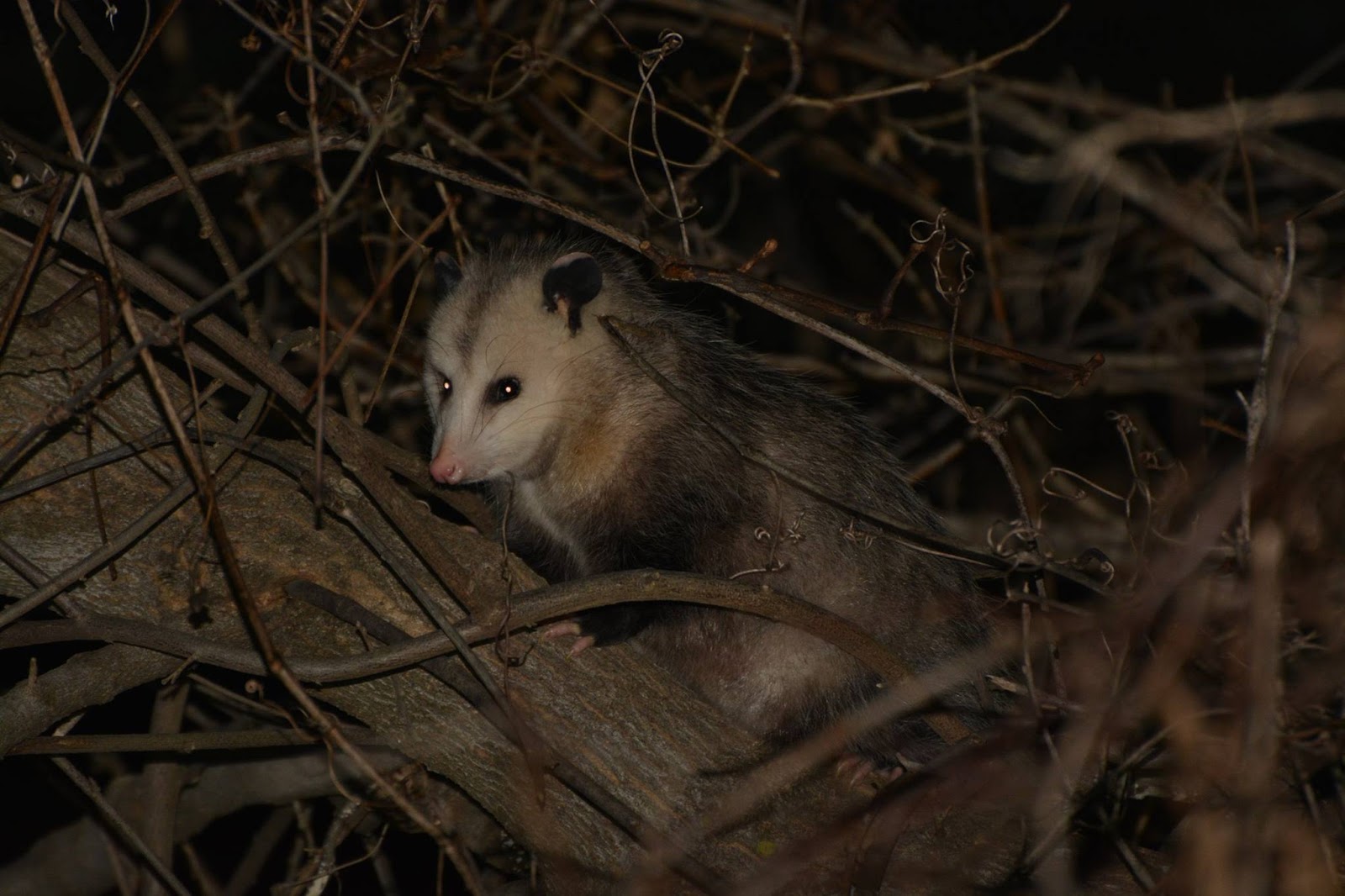