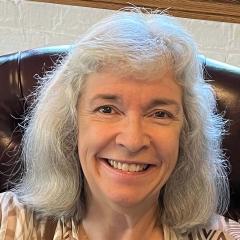 Debra Elmegreen, Professor Emerita of Astronomy, is an awardee of the Space Telescope Science Institute (STScI), operated by AURA. This grant will support the program “JWST probes Feedback in Emerging extrAgalactic Star clusTers: JWST-FEAST,” which will utilize MIRI and NIRCam infrared imaging via the James Webb Space Telescope.

JWST-FEAST has multiple science goals related to star clusters in nearby galaxies through MIRI and NIRCam imaging. The program will focus on Science Goal: Clustering of embedded cores vs. clustering of exposed regions. The substructure of the embedded regions of star formation will be studied in particular. Professor Elmegreen suspects that the very youngest and most embedded objects will show a hierarchical substructure characteristic of interstellar gas, even at high density. She expects that, over time, the substructures will merge, forming more homogeneous cluster cores.

The relative time sequence will be determined from the degree of dust clearing, since relative ages for very young clusters are difficult to determine from the SEDs alone. In this way, the sequence of events leading to the coagulation of stars into dense clusters will be reconstructed. This evolution will be examined as a function of embedded stellar mass and  density as well as other parameters such as metallicity and pressure. The program will use catalogs for clusters produced by the team with various methods to study subcluster  distributions, including the two point correlation function, delta variance, and measures of fractal structure based on source counts in images Gauss-blurred to various degrees. The program will also examine mass segregation of clusters, i.e., whether more massive clusters are systematically born closer together.