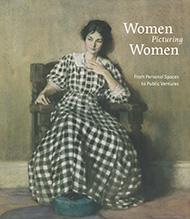 Organized by the Frances Lehman Loeb Art Center at Vassar College, Women Picturing Women studies the key themes that emerged when selecting only images of women by women artists. In these findings, women artists from the seventeenth century to the 1960s frequently communicated the idea of an intimate or sheltered enclosure such as a room, studio, or garden, even though these women participated in a more public arena to show or even make their work. Other women artists relayed the idea of venturing into an outright public place such as a street or an office, or into the more public, intellectual world of a narrative found in religion, mythology, or social critique.

In this exhibition from the collection, portraits and domestic scenes appear often, with family, friends, colleagues, models, and the artists themselves playing major roles. Home-centered settings and situations, including views of mothers and children, proliferate. Idyllic, invented landscapes, mostly of the here and now, appear, where artists placed women in a calm or a fantastic natural world. Mythological, religious, and socially critical works are seen less often, while documentary photography spurred a veritable movement among women artists in the twentieth century, and is represented here with several examples.