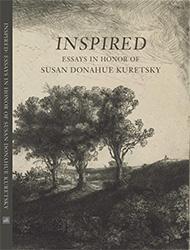 This collection of essays, published by the Frances Lehman Loeb Art Center at Vassar College, celebrates the career of art historian Susan Donahue Kuretsky, Vassar Class of 1963 and Professor of Art on the Sarah Gibson Blanding Chair. A scholar specializing in Northern European art, Kuretsky has spent more than four decades introducing students to this material and serving as an invaluable mentor to many. The essays in this publication—all by former students—focus on works of art ranging in date from the fourteenth century to the twenty-first and in geographic origin from Europe to the United States to Africa. These writings are all grounded in observation and the close study of original objects, pillars of Kuretsky's pedagogy.

“A finely tuned process of analytical looking can be a crucial aspect of learning, no less rigorous or demanding than any other. Indeed, cultivation of the sense of sight can foster a more open-minded and acute perceptiveness that may ultimately carry over into other, very different, interests and endeavors.”—Susan Donahue Kuretsky, 1995