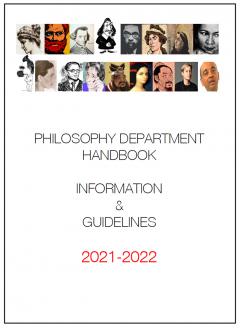 Philosophy explores the principles that govern the world around us, our actions in that world, and our claims to knowledge about that world. The study of philosophy helps students to improve their understanding in these areas and to evaluate arguments within and outside of philosophy.

Students interested in philosophy are encouraged to take one or more of the five introductory-level courses that most clearly correspond to their interests and their plans for future study. Philosophy 101 and 102 are courses in the history of Western philosophy and treat many of the great philosophers of the past, from the Greeks to the 18th century. The first semester focuses on the origins of Western philosophy in pre-Socratic thought through Plato and Aristotle while the second introduces the works of continental thinkers from Descartes through Kant. This sequence provides an essential background for understanding later philosophical inquiries.

Philosophy 105 and 106 are organized around philosophic problems rather than authors or periods. 105 explores some traditional problems such as the relation between mind and body and the nature of truth. 106 treats major philosophic problems arising out of contemporary moral and political issues. Both courses help students develop their critical powers.

Philosophy 110 is an introduction to ancient Chinese philosophy, focusing on early Confucianism, Taoism, and other philosophies.

Students interested in declaring a concentration or a correlate sequence in philosophy can learn more in the Philosophy Department Handbook for majors.

Academic requirements and courses are available in the Vassar College Catalogue.