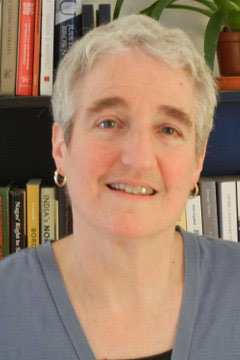 Martha Kaplan joined the Vassar faculty in 1990. She graduated from Bryn Mawr College in 1979 and received her PhD in Anthropology in 1988 from the University of Chicago. A cultural and political anthropologist of colonial and postcolonial societies, her recent work focuses on the anthropology of water, nation and environmental imagination.

Martha Kaplan joined the Vassar faculty in 1990. She graduated from Bryn Mawr College in 1979 and received her PhD in Anthropology in 1988 from the University of Chicago. A cultural and political anthropologist of colonial and postcolonial societies, her recent work focused on the anthropology of water, nation and environmental imagination. She has pursued research in Fiji, India, the United States and Singapore. Selected publications include Neither Cargo Nor Cult: Ritual Politics and the Colonial Imagination in Fiji (Duke University Press 1995) a study of an innovative anti-colonial movement in Fiji; “Panopticon in Poona: an essay on Foucault and Colonialism” Cultural Anthropology 1995 10 (1) 85-98; Represented Communities: Fiji and World Decolonization (co-author John D. Kelly, University of Chicago Press 2001) which re-frames the origins and consequences of the nation-state in the post WWII decolonization era; Outside Gods and Foreign Powers: Making Local History with Global Means in the Pacific (an edited issue of Ethnohistory 2005) which considers uses of the global in crafting local systems of meaning and power and includes her first study of the local consequences of the production of “Fiji Water.” Her research has been supported by Fulbright, National Science Foundation, Charlotte Newcombe Foundation, American Institute of Indian Studies and the Wenner Gren Foundation for Anthropological Research.

Her current research on the cultural politics of water, comparatively focused on Fiji, the United States and Singapore, considers water and its uses simultaneously as public and privatized, as necessity and object of fantasy, as locus of exploitation and as source of postcolonial innovation, as a public utility and an environmental resource. “Fijian Water in Fiji and New York” 2007 and “Lonely Drinking Fountains and Comforting Coolers” 2011 appeared in Cultural Anthropology, and “Nation and Conservation: Postcolonial Water Narratives in Singapore Rituals” 2016 appeared in JMBRAS. In 2014-15 she held a Fulbright Fellowship and was Distinguished Affiliated Fellow at the Asia Research Institute, National University of Singapore, working on a book project titled Water Cultures: Fiji, New York, Singapore. Further research in Singapore (summer 2015, 2016) was supported by a grant from the cultural anthropology program of the US National Science Foundation.

Martha Kaplan teaches and advises students in the Anthropology department, the Asian Studies program and also the International Studies program. Her teaching interests include myth, ritual, and symbol; culture, power and history; social and cultural theory; colonial and postcolonial discourse studies; nations and globalization; and the cultural politics of water. Recent courses include “Cultural Anthropology,” “Anthropology of Water,” “Anthropological Theory,” “Myth, Ritual and Symbol,” “The Pacific,” “Nations, Globalization and Postcoloniality,” “Decolonizing Rituals,” and “Imagining Asia and the Island Pacific.”

The work of Martha Kaplan, Professor of Anthropology was noted in a Raul Pacheco-Vega column. June 4, 2017