The campus community gathered on January 16 to celebrate the legacy of Dr. Martin Luther King Jr., taking inspiration from the words of the slain civil rights leader and Vassar’s own student poets. 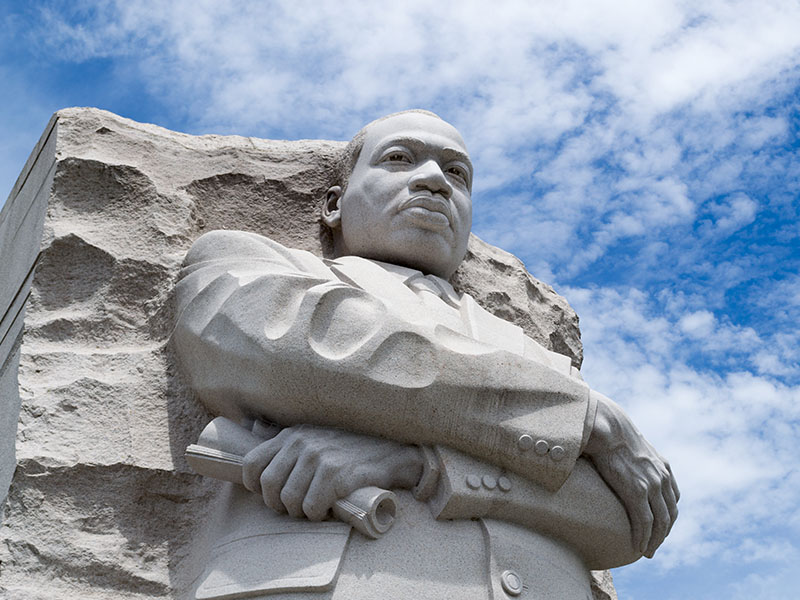 The Villard Room event began with a welcome from its organizers, Special Assistant to the President Wesley Dixon and Wendy Maragh Taylor, Associate Dean of the College for Student Growth and Engagement. “It’s especially important to us today to remind you that we don’t want to just be spectators and remember the legacy, we can be participants,” she said. Maragh Taylor then invited the approximately 100 people in attendance to write down their own dreams on index cards provided—“to think about it and then actually act on it.”

President Elizabeth H. Bradley reprised that call to action, noting that King “was not just a thinker, but a doer. He said, ‘No society can fully repress an ugly past when the ravages persist into the present.’” Bradley, who had just returned from a trip to Rwanda, said she was inspired by the “amazing restorative work” that country is doing to move forward from the horrific 1994 genocide that occurred there. “King’s words underscore the value of evaluating and reevaluating history—that’s what we’re going to try to do at Vassar—and that a society will not achieve justice unless it is committed daily—daily—to evaluating itself,” she said. “We need to do something every day. And this is what we really learned in Rwanda as well—they do something every day.”

Keynote speaker Jonathon Kahn, Professor of Religion and Director of Engaged Pluralism, discussed King’s belief in “Personalism,” which stresses “the sacred and inviolable dignity and worth of all persons as individuals.” This concept was echoed in an original poem by Favour Movel ’25 titled Baki—a word that in the Hausa language of West and Central Africa means “Black.” Recited Movel:

“Baki stands for so much more than a superficial hue,
It is a reminder that every existence is valuable and true,
That a person’s identity cannot be reduced to a single chroma,
But rather, it is a complex tapestry, rich and summa.”

Movel’s classmate Marissa Desir ’25 also read original work, while a group of five other students recited I Dream a World by Langston Hughes.

Special guest speaker Jen Brown—community lawyer, activist, and a leader at Race Unity Circle—uplifted audience members with song and riveted them with the story of the firebombing of King’s house in 1956. When an angry crowd of King supporters gathered to exact revenge, Brown said, King talked them down “with a spiritual transcendence astonishing for anyone much less a 27-year-old,” which was King’s age at the time. “Dr. King told us to love our enemies,” she said. “Hate twists our minds and our hearts. Dr. King said that love has a redemptive power. It is through love that we build the bridge, that we shine the light, that we invite unity, that we find one another.”

Rev. Sam Speers, Associate Dean for Religious and Spiritual Life and Contemplative Practices, concluded the event with a prayer of King’s that asked for “faith to believe redemption of people, relationships, communities, and whole nations, is possible.”

View a gallery of photos from the event.