More than 1,500 alums, friends, and family members were on campus to celebrate Reunion the weekend of June 3–5. Classes spanned 60 years (1957 to 2017) and Reunion participants hailed from an impressive 44 states and 14 countries—traveling from as far away as Vietnam, China, Iceland, and Switzerland.

During the Reunion Parade on Saturday morning, alums marched—with class swag such as feather boas and colorful scarves and umbrellas—from the Chapel to Commencement Hill. As a precaution against COVID, Celebrate Vassar, traditionally held in the Athletics and Fitness Center, took place overlooking Sunset Lake. Vassar spirits were high as alums marched onto the hill, welcomed by the outgoing President of the Alumnae/i Association of Vassar College, Stephen Hankins ’85 P’13,’17. In keeping with tradition, those celebrating their 50th Reunions—1970 and 1972—were serenaded with the dulcet sounds of Salve as they strode to their seats.

Each year, the AAVC holds its annual elections during Celebrate Vassar. Continuing the tradition, Hankins officiated the approval of a new slate of AAVC officers. (All, including the incoming president, Monica Vachher ’77, will assume their roles on July 1.)

During the festivities, Vassar Fund Chair Stephanie Hyacinth ’84 announced class reunion giving totals and participation highlights, thanking each reunion class for its efforts to support the College. As of this publication, reunion classes had raised a total of $45,719,417 for all funds (five-year class totals). That number will most certainly grow; Hyacinth reminded the alums that they still have time before June 30 to make a Reunion gift. 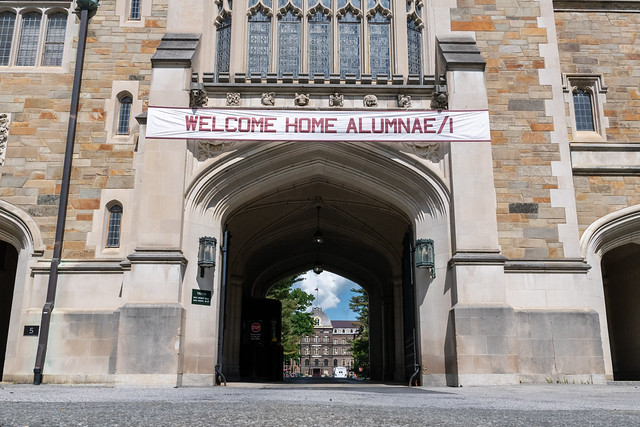 Slideshow of images from Reunion 2022.

The 50th Reunion Class, 1972, alone raised $12,000,972. This includes their class gift of $162,000 to establish the first endowment fund to support programming at Vassar’s Institute for the Liberal Arts. Reflecting on their success, Pat James Jordan ’72, P’17 said, “Our class felt very strongly about giving back and, personally, I feel that to whom much is given, much is required. So even though I have some criticisms and I have some challenges to voice to the College, I also feel like it’s our college, and it’s up to us to keep it thriving. We believe in giving back, we believe in philanthropy, because it’s the only way to be a responsible alum who got so much from this school.”

Before the parade, President Elizabeth H. Bradley and Hankins had hosted a volunteer recognition breakfast to thank those who keep alums connected to Vassar and each other—everyone from class notes correspondents to class presidents. During the breakfast, AAVC paid special tribute to two stalwart alums: Edward Pittman ’82, recently retired Senior Associate Dean of the College received the 2022 AAVC Outstanding Faculty/Staff Award, and Deb Macfarlan Enright ’82 received its Outstanding Service Award.

In addition to class dinners and receptions, alums enjoyed an Hour with the President in which Bradley gave an overview of developments at the College; a variety of Alumnae/i College presentations, on topics as diverse as environmental justice, human cognition, and Vassar’s multidisciplinary courses; as well as tours of the campus arboretum, Loeb collections, and the Bridge for Laboratory Sciences.

The Music Department hosted a program about pioneering astronomy professor Maria Mitchell, culminating in the performance of songs composed by Jonathan Chenette, Professor of Music on the George Sherman Dickinson Chair, and sung by Jacquelyn Matava ’09. There were also gatherings for former international students, athletes, members of the LGBTQ+ community, African American alums, and more.

Despite a weekend packed with activities, most alums were simply overjoyed to spend time with old friends. “It was a small enough campus that we knew everyone...and that’s what’s so nice about coming back for Reunion—we know everyone,” said Penny Unger Zuk ’87.

Those who had missed their 5th (and first) reunion and landmark 50th reunion during COVID had been invited to return to their alma mater along with reunion-year alums, and Thomas Lawler ’15, said he was thrilled. “This was supposed to be our reunion two years ago—we were delayed—and it’s been incredible,” he said. “I cried during the parade, I’m having an incredible time being back on campus and back with our community.”

As always, Reunion was a Herculean effort by folks across the college—including Alumnae/i Engagement staff, Campus Dining, Media Resources and Facilities crews, and the 70 or so students who worked to support the event. It takes a “Vassar Village” to bring Reunion joy!