This year, the Alumnae/i Association of Vassar College (AAVC) has chosen five alums to honor for their work at Vassar and beyond. The awardees are: two 1982 classmates who became employees of the College soon after graduating and remained devoted to it for decades; a young alumna excelling in two divergent careers simultaneously; and two distinguished lawyers whose work has taken on particular relevance as threats against basic human rights intensify in the U.S. and around the world. 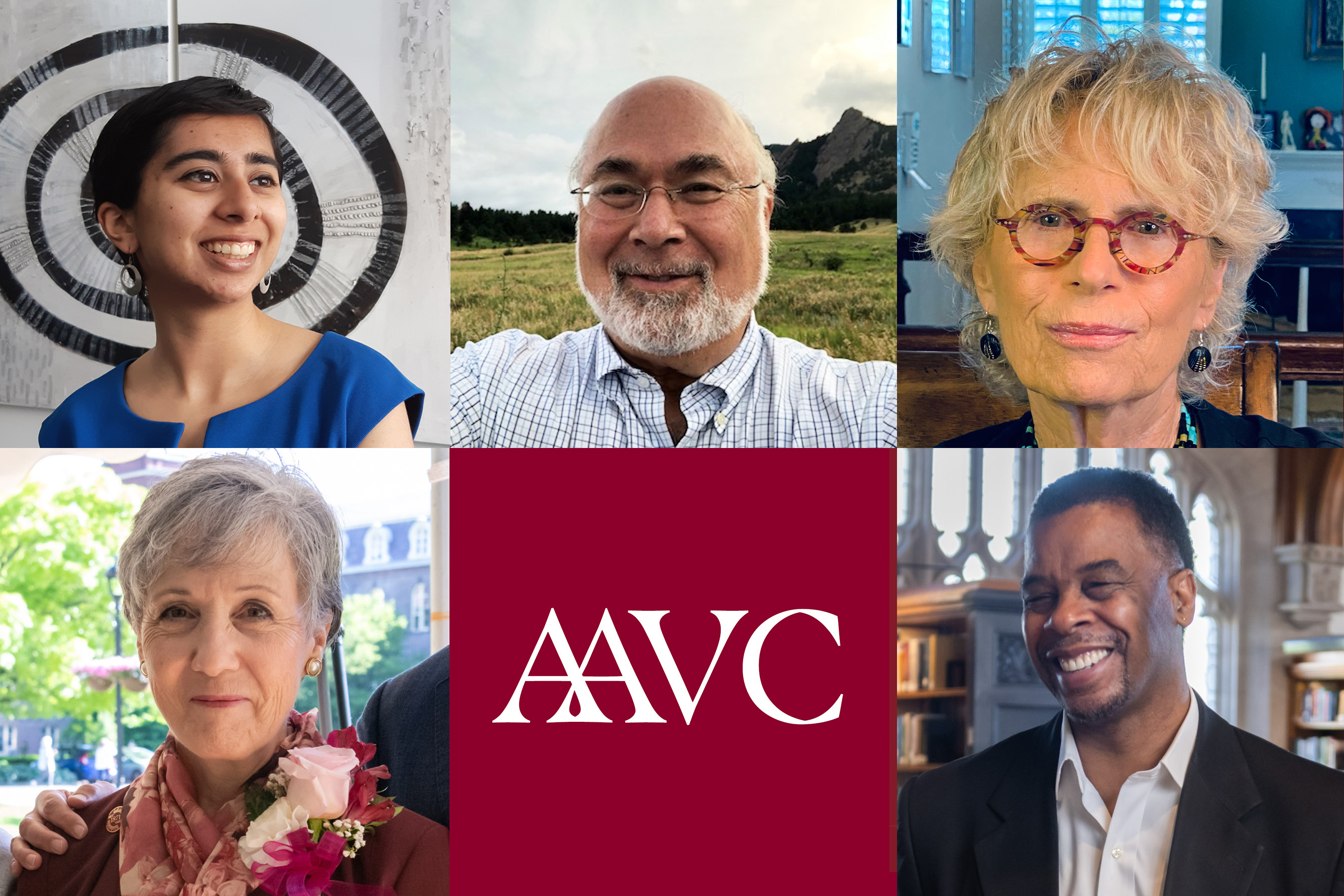 “These are people who are inspirational,” said Dr. Amy Pullman ’71, chair of the AAVC’s Alumnae/i Recognition Committee, which oversees the selection process for the awards. “It really felt like a great slate to the entire committee.” Award presentations began at Reunion 2022 in early June and will continue through the end of the year.

Pittman retired as Senior Associate Dean of the College for Professional Development in 2021. During his three decades at Vassar, he became an important mentor and supportive friend to generations of Vassar students while originating several roles at the College. He joined the Vassar staff in 1990 as the College’s first Director of Multicultural Affairs and became the first director of the ALANA Cultural Center in 1993. This was followed by 20 years as the College’s inaugural Associate Dean of the College for Campus Life and Diversity, a role in which he advanced the mission of the College’s affinity centers. In his last role as Senior Associate Dean, Pittman developed diversity, equity, and inclusion programs for Vassar’s administrators and staff. Upon Pittman’s retirement, Dean of the College Carlos Alamo-Pastrana praised him for taking on “critical and difficult equity work” that enhanced student and employee well-being. His DEI expertise continues to be an important resource for the alumni community.

While presenting the award to Pittman at this year’s Reunion, AAVC President Steve Hankins ’85 P’13,’17 said no one had done more to broaden and deepen Vassar’s commitment to diversity on campus and to work in partnership with its surrounding community—in which Pittman was born and raised. “With his generosity of spirit, he instinctively understood the importance of showing up and being an ally,” Hankins said. “We owe you so much, and we promise to honor your work by continuing to strive to get it right.”

“Growing up as a quiet kid in downtown Poughkeepsie, I could never have imagined being a Vassar student—much less an administrator and dean for 31 years—so this is truly an honor,” Pittman said in accepting the award. “I really saw working here as part of a rich legacy of Black students at Vassar who made it possible for me to enter Main Gate. For me, that legacy simply continued when I became an administrator in 1990 on the heels of a student movement that was transforming the campus into what it needed to be.”

Macfarlan Enright, now a management consultant to nonprofits, joined the Vassar staff as AAVC’s first Assistant Director for Recent Classes as a young alum. Although she did not remain an employee of the College, she never stopped working for it—and is still one of Vassar’s most dedicated volunteers, serving in an impressive array of volunteer roles for the last 40 years. Her numerous roles include AAVC Vice President, and, most recently, Chair of the 1871 Circle, which brings together past board members of the AAVC. Always willing to share her expertise with alums and students alike through the Career Development Office, Macfarlan Enright has also created internship opportunities for students at her consulting company, the Macfarlan Group.

Hankins, who presented the award to Macfarlan Enright at Reunion, called her “an ambassador extraordinaire for her beloved alma mater” and noted that “Her long history of service to the College began the minute she received her diploma.” Over the years, Hankins said, “she’s been up for literally everything she’s been asked to do. She never says no to Vassar.”

“It is a privilege to accept this award and I do so with great humility,” said Macfarlan Enright. She also issued a challenge to be completed by her class’s next Reunion in five years: to cultivate five engaged Vassar volunteers. “I ask that you see this as an opportunity to share your excitement and your stories to create a broader core of Vassar volunteers across the world. The AAVC and the College need us,” she said.

Raina, a member of Phi Beta Kappa, was born in India, grew up in South Africa, and now lives in Canada. She is currently Director of Commercialization at the nonprofit Praxis Spinal Cord Institute, where she is responsible for bringing to market innovations for improving the lives of people with spinal cord injuries. For her work at Praxis, the British Columbia magazine BCBusiness honored Raina with a “30 Under 30” recognition in 2020.

“Arushi Raina epitomizes the eminence and gravitas that the young alum award represents,” said Sharon Davidson Chang ’84, P’19 a member of the selection committee. “Her business acumen at such a young age is off the charts.”

Raina is also a novelist. Her first book for young adults, When Morning Comes, began as her Vassar thesis. It follows four teens living in Johannesburg during apartheid. Publisher’s Weekly called it “a riveting and accomplished debut.” She is currently working on a second. The AAVC will present Raina’s award to her at Fall Convocation.

Raina said she was “completely surprised” to learn she would be honored by the AAVC, “but Vassar has a way of crossing coasts and time to reach you,” she added. “What an incredible group of alumni to get chosen from!” She also said the liberal arts education she received at Vassar helped her to break into the healthcare consulting field even without formal training. “As I’ve grown in my career as a leader, the ability to ask the right questions, traverse totally different disciplines in a matter of minutes, to dig for primary data for answers has allowed me to grow and be part of incredible projects across harm reduction, cell therapy, robotics, neuro-stimulation,” she said. “The fact that, at Vassar, I was able to pursue a writing career, with a dedicated thesis class to develop When Morning Comes, while completing an Economics degree—that was a huge gift that definitely shaped my path after Vassar.”

Granoff, an acclaimed international lawyer and writer, is President of the Global Security Institute, an organization focused on controlling and eliminating nuclear weapons. He also serves as Senior Advisor and Representative to the United Nations of the Permanent Secretariat of the World Summits of Nobel Peace Laureates; and he chairs the Task Force on Nuclear Nonproliferation of the International Law Section of the American Bar Association.

During a 2020 Zoom ceremony in which Granoff was presented with a lifetime achievement award from the American Bar Association’s International Section, renowned anthropologist Jane Goodall praised Granoff’s dogged idealism: “Jonathan is one of those people who tackles what seems to be impossible,” she said. “So many people don’t believe that it will ever be possible to have a world of peace, to have a world without nuclear weapons. But Jonathan has never given up. And it’s that persistence, that devotion to an ideal, that makes him such a very, very special person.”

“He stood out because of his ceaseless work in the field of peace,” said Pullman, the selection committee chair. “Jonathan’s role in the United Nations and the Taskforce on Nuclear Nonproliferation is all the more important in light of today’s international events, of the unprovoked invasion of Ukraine by a foreign country with nuclear weapons.” A date for the award presentation has not yet been set.

Feigen, a women’s rights lawyer who has also worked extensively in the entertainment field, is a pillar of the modern Women’s Movement. Part of a small minority of women graduating from Harvard Law School in 1969, Feigen launched a class-action suit against the Harvard Club for barring women from membership—spurring the club to admit women just before the case went to trial in the early 1970s. Around the same time, she co-founded Ms. Magazine with Gloria Steinem and became a founding Director, along with Ruth Bader Ginsburg, of the American Civil Liberties Union’s Women’s Rights Project.

“She has been involved in every major women’s rights issue in modern times—plus she has expanded her interest to not just women’s rights but other rights,” noted Pullman. “She’s done so much through the years that she could have been honored at any time.”

Feigen also has been a featured speaker in Vassar’s online panel discussion, “Women’s Rights, Present and Future,” and other alumni programs.

The honoree said she was “blown away” at being chosen for the Spirit of Vassar Award and “can’t wait” to come back to campus in the fall to accept it. “I had no idea I’d ever get an award like this,” Feigen said. “It’s just an enormous compliment.” She also recalled how attending Vassar gave her a welcome respite from the unrelenting anti-Semitism she faced in the private day school she attended in Chicago and introduced her to a treasured mentor, Professor of Mathematics Winifred Asprey, as well as classes in logic that she loved. And she found friends at Vassar with great senses of humor who broadened her perspective and made her laugh.  “I got my spirit back at Vassar,” she said. “That was really the grounding that prepared me to take on the profound sexism that greeted me at Harvard Law School—and, of course later in life.”