Verdun Experiences, a slim volume written by Margaret Lambie and comprised primarily of an article she wrote for the November 1919 Vassar Quarterly, recounts the College’s special connection with the battered French city of Verdun, which began less than six months after the Armistice of November 11, 1918 ended the First World War that had given the city such tragic and lasting fame. Lambie was one of several Vassar graduates who had been attached to the American Expeditionary Force and served with the Red Cross in France during the last year of the war. Upon their return home, these women had volunteered to continue their services in whatever way they could be helpful. Thus the Vassar Relief Unit was born.

Recruited from the alumnae of Vassar and equipped through the donations of the College’s students, faculty, alumnae and friends, the Unit set sail for France in February 1919, under the aegis of the American Red Cross and in response to an invitation from the President of the Comité d’Assistance de l’Arrondissement de Verdun. Upon their arrival in the shattered city, the women found that suitable accommodations were not so easy to come by:

The window panes were oiled paper giving an artistic yellow light, much like that in Oriental houses, which did its unsuccessful best to conceal the dust and cobwebs accumulated during the past four and a half years … We afterwards realized that what at first seemed the minimum of necessities prepared for us as strangers was more than the majority of refugees found upon returning to their former homes. 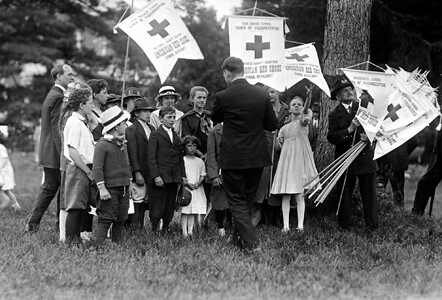 Nevertheless, the Vassar Relief Unit immediately set about its work. Three days after the group arrived,

"[W]e were asked to take charge temporarily of the women’s section [of a refugee hotel]. This meant welcoming the women when they arrived tired, cold and hungry, and giving them a bed for a franc a night. Often they had walked many miles upon the battle-fields, searching for graves many of which never could be found."

One of the first and most lasting innovations that the Vassar Relief Unit instituted in the war-torn city began with the purchase of a camionette (small truck) that was sent to nearby villages to collect milk from farmers. This milk was pasteurized and modified, then distributed free of charge at the Unit’s milk station, the Goutte de Lait (literally, drop of milk), providing the local children with some badly needed nutrition. In true Vassar style, the women whom the locals dubbed les dames américaines sought to empower, not merely to provide: “We decided to bring to Verdun a French trained nurse. One of our policies was to help the French to help themselves.” The success of the Goutte de Lait led to the opening of the Cantine Populaire for French civilians:

"[I]t keeps one of us busy making change, an accomplishment which the Vassar Unit is painfully acquiring in terms of sous. A large bowl of chocolate can be bought for three cents, café noir is also three with a cent added for milk, sandwiches of corned beef, ham or jam are six cents and a cake of chocolate is sixteen. With warmer weather we plan to sell soft drinks of a variety the French like but which Americans would consider a poor substitute for an up-to-date soda fountain."

The Cantine Populaire, too, became a huge success with the local citizens. It also gave the Vassar alumnae the chance to teach some of the girls of Verdun, who had led somewhat sheltered lives, a different view of a woman’s place: “About half a dozen French girls became interested in the Cantine, volunteered to take shifts at the desk and helped with sugar sales … It was rather new for some of the French girls to have a chance for such independent action and it appealed to them.” 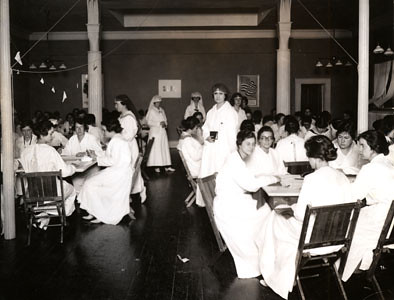 Sometimes the intermingling of American women from Vassar and the French populace led to amusing culture clashes. Lambie noted disapprovingly of a Frenchwoman who worked at the Cantine, “She urges us to sell cakes of chocolate a mouse had sampled, saying that food much more damaged is often sold in town.” On the other hand, the head of the Vassar Unit also admitted, “In passing it must be commented that the outrages committed upon the French language by American accent and linguistic ignorance are beyond description and the never-failing politeness with which the French endure them are beyond praise.”

Naturally, with many Doughboys still stationed in France after the war’s end, les dames américaines were bound to attract some male attention. Wrote Lambie,

Ludicrous and also pathetic are some of the offerings made by [American soldiers] to repay our hospitality. They constantly bring us gifts of assorted variety. Here are a few of the tokens laid at our feet! Shells of every size and make, helmets, shovels, munition boxes, old stoves, a dagger, knives, mess kits, dishes, coal, candy, a head light from a French truck to light our hallway, electric bulbs and wire, a piano, an inlaid dresser we use for a serving table, violet and primrose plants for our ‘roof garden,’ a bunch of stunning looking flowers which from their scent must have been skunk cabbages. There was an unsought offer to have our washing done. For transportation, a saddle horse and OD breeches (we didn’t use) and rides in AEF ambulances from Cadillacs to side-cars, trucks and ambulances which we tried to be meticulous in accepting for business purposes only.

On Memorial Day 1919, the Vassar Relief Unit attended the dedication ceremonies for the Meuse-Argonne Cemetery at Romagne-sous-Montfauçon. “It was the time of daisies,” Lambie recalled. “The thoughts of the Unit naturally turned toward the College campus and daisy gathering days of Sophomore year. … [We] mounted the slope leading to the cemetery. There we thought we saw another field of daisies but it proved to be a field of white crosses marking the graves of thousands of American dead.” 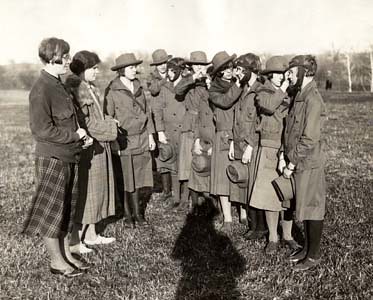 The original members of the Vassar Relief Unit left Verdun on September 1, 1919, having played an important part in the city’s return to a normal existence after the horrors of the war. The Goutte de Lait continued its good work under other Vassar graduates, and ultimately was taken over by the Municipality of Verdun in 1921. More than fifteen years later, it was still in operation, distributing approximately 60,000 liters of milk, mostly free of charge, in 1936.

“May we be pardoned for saying that the French were generous in their thanks for the efforts of the Unit,” wrote Lambie. “As one man expressed it, ‘Le Vassar Unit, c’est le moteur qui marche.’ (‘The Vassar Unit is the motor that runs.’)” In a letter from Verdun reprinted in the February 12, 1921 Misc, Jeanette Baker ’18 wrote, “I do want you to know how dear the name of Vassar is to Verdun children.”

The members of the Vassar Relief Unit were among an estimated 200 of the College’s graduates (four of whom died while in France) who served overseas during World War I. A marble plaque was placed by the French at the Goutte de Lait as a tribute to all of these women. Also in their honor, on Armistice Day, 1920, the French government presented Vassar with a most unusual gift – a 40-ton St. Chamond tank.