In 1865, President John H. Raymond gave a sermon in honor of the college’s opening. Such services continued to be held every September until 1914. Then, at the suggestion of Lucy Maynard Salmon, a convocation ceremony, with a procession of the faculty in academic regalia, was organized to formally open each academic year. The ceremony included an invocation by the President, which became the responsibility of the Chaplain when that position was established under the presidency of Henry Noble MacCracken. However, the President still plays a leading role in the proceedings, and remarks from a prominent member of the faculty or administration still feature prominently in the ceremony. The student song “Gaudeamus Igitur” has been part of convocation since at least the 1920s. The original convocations were held in the morning, in the tradition of chapel services, but in 1951, the ceremony began to be held in the evening, and by 1967, it had been changed to mid-afternoon. 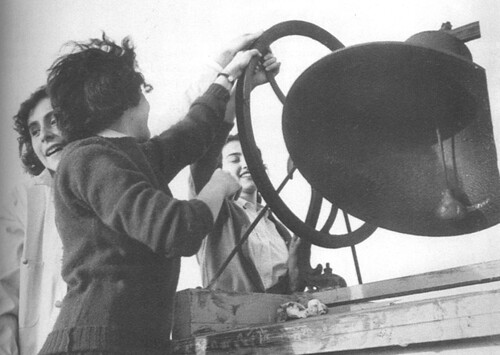 The Class of 1958 become seniors

By 1935, academic awards were announced at convocation, which continued until 1970. An address by the president of the student government was introduced to the proceedings by 1967. Attendance at convocation was mandatory for all students at least through the 1970s, and after that it was required for freshmen and seniors until 1995. Almost every convocation has been held in the college chapel (whether the original chapel in Main Building or the present one constructed in 1904), with the exception of several years in the 1960s, when the ceremony was held in the outdoor theatre. A spring convocation was first held in the 1980s as an official end to the academic year. The ceremony is similar to that of fall convocation, with the addition of a ritual passing of the gavel to the next president of the Vassar Student Association. After spring convocation, juniors ring the bell atop Main Building to symbolize their transformation into seniors, and seniors are welcomed into the Alumnae Association.