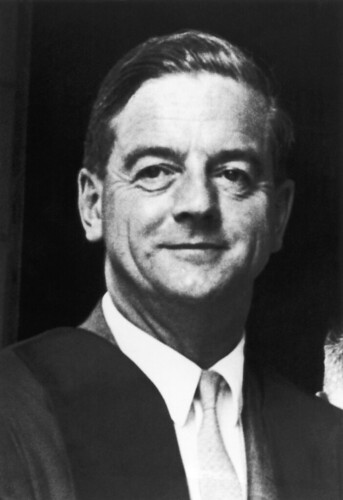 Succeeding Sarah Blanding in 1964 to become Vassar’s seventh president, Alan Simpson led the college through far-reaching changes, most notably its transition to a coeducational institution in 1969. Simpson once said, “Our problem is to plot an imaginative path between harlotry, humbug, and huckstering on the one hand and encrusted conservatism on the other.” He was true to this statement. Vassar’s curriculum was radically altered under Simpson’s “Comprehensive Plan”, its morals tested with his speech “Vandals and Vandal-Worship”, and its population increased and diversified after coeducation.

A student in a 1972 biographical sketch in The Miscellany News drolly noted, “Contrary to popular opinion, Alan Simpson was born,” alluding perhaps to Simpson’s reputed British reserve, or even reflecting Simpson’s own reputation as a “speaker of pith and pungence.” Simpson was born in Gateshead, Durham, England in 1912 and attended the Dame Allan’s School, where he was awarded an open scholarship to Worcester College, Oxford University. Concentrating on history, he graduated with honors in 1933 and received a M.A. at Merton College, Oxford in 1935. From 1933 to 1935 he studied at Harvard as a Commonwealth Fellow, and received a Ph.D. from Oxford in 1940, specializing in the Puritan era in Britain and America. Simpson married Mary McQueen McEldowery in 1938, the same year in which he joined the faculty at the University of St. Andrews where he taught modern history. During World War II he served as a major in the Royal Artillery, and afterward returned to teach at St. Andrews. In 1945 Simpson moved to Chicago to serve as a professor of social science at the University of Chicago, where he served as the dean of the undergraduate college from 1959 to 1964. In 1954 he became a U.S. citizen.

Simpson’s interest in women’s education predated his presidency at Vassar, which began in 1964. Simpson and his wife had visited the U.S.S.R, where he was impressed by the prospect of women in professional fields. Simpson remarked, “The brains and energy of women are our most neglected national asset.” On another occasion, he said, “We need to give women more opportunities to develop their intellectual and esthetic potentialities.” With the dual goals to advance the cause of women and that of liberal education, Simpson assumed his presidency, committed to the Vassar tradition of the female-only learning environment. Ironically, by 1966, talk of a coordinate college with all-male Yale University had begun.

Simpson’s evolving interests, first, in a coordinate male-female college and, eventually, in coeducation, concurred with a larger agenda to enhance Vassar’s appeal and academic standing. By 1966, Vassar was lagging behind other Seven Sister’s colleges in admission, and faculty was becoming increasingly hard to attract to a college whose facilities and salaries could not match a large university’s. Simpson was also well aware of students’ dissatisfaction with Vassar’s relative geographic and social isolation from other schools, especially in comparison with other women’s colleges. In 1966 Simpson established the Committee on New Dimensions, which discussed a range of issues such as coordinate male-female education, coeducation, graduate programs, curricular reforms, aims to increase racial diversity, calendar changes, and off-campus education.

The Committee’s work culminated with the 1969 Comprehensive Plan. The Plan was innovative in that it gave students more academic autonomy. A new curricular plan allowed for three kinds of majors - traditional disciplinary, multidisciplinary, and independent. Requirements were simplified to allocate more freedom in class selections and off-campus educational experience was encouraged as part of a broad liberal education. The issue of coeducation was relegated to another committee.

In November of 1966, Simpson and Kingman Brewster, president of Yale, asked members of their faculty and administration to investigate the desirability and viability of a merger between Vassar and Yale, with Vassar perhaps relocating to New Haven. Reactions were mixed, and in 1967 the Yale-Vassar project was terminated. Coeducation was instead adopted, and in 1968 the Vassar charter was amended to allow men to matriculate and reside at Vassar. In 1969, the first male students came to Vassar as exchange students, and in 1970 the first freshmen male students arrived on campus.

Many buildings were constructed during Simpson’s presidency to accommodate the increasing student population as well as new departments and academic opportunities outlined by the Comprehensive Plan. Small, cooperative student housing in the Town Houses and Terrace Houses, a dining center in the Student’s Building, the Hallie Flanagan Davis Theater, Olmsted Hall of the Biological Sciences, Prentiss playing-field, the College Center, and the Helen Lockwood Library reflected the rapid change in the college’s academic and co-curricular life.

The 60’s and 70’s were without doubt a period of radical social upheaval. While Simpson was an advocate of appropriate change with the times, he pleaded for a “sense of decency” as well as “style and grace.” In 1975, Simpson gave a talk titled “Vandals and Vandal Worship”, where he condemned the recent theft and vandalization on campus, the nudity and “offensiveness” of the 1975 yearbook, and the general atmosphere of disrespect and impertinence that he suspected was brewing on campus and in the country. Simpson retired from Vassar in 1977 and died in 1998. He had guided Vassar through a period of great change, maintaining all the while the value of tradition and decorum.

Simpson, Alan. “A Report to the Graduates of Vassar College.” 10 November 1974