You are here: Home / Vassar Off Campus / John Burroughs

The renowned naturalist John Burroughs had a close, although informal, relationship with Vassar College. Burroughs, who lived from 1837 to 1921, was one of the "big five" of American naturalists. The others were Louis Agassis, John James Audubon, John Muir, and Henry David Thoreau.

For more than thirty years he served as adviser and mentor to the members of the Vassar Wake Robin Club, an undergraduate organization devoted to the study of nature and named after a book Burroughs wrote in 1871. Once a year Vassar students would cross the Hudson River and travel the twelve miles to "Slabsides," the rustic retreat in West Park to which the author had retired for his study of flora and fauna and where he did much of his writing. 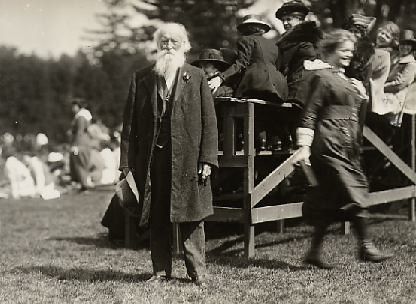 In a letter dated May 29, 1919, Helen I. Haight (Vassar Class of 1898 and sister of Elizabeth Haight, Class of 1894) wrote to John Burroughs, telling him of his influence on her own work:

'It is needless to say what a treat our visit with you last Sunday was. I came back to this old city, with much inspiration for my work and more tolerance for its blind ways because of the memory of that little clearing up there in the woods with all it stands for."

In 1982 the Vassar College Library acquired, through a grant from the Pew Memorial Trust, the manuscript journals of John Burroughs, which he had compiled over the last 45 years of his life. The 53 notebooks were purchased by the college from Elizabeth Burroughs Kelley of West Park, New York, granddaughter of the author. The first entry in the first notebook is for May 13, 1876; the last one is for February 4, 1921, seven weeks before Burroughs's death at the age of 84. Although the notebooks are devoted principally to Burroughs's observations of nature, they also contain a wealth of literary comment. During his long life he was a friend of Ralph Waldo Emerson, Walt Whitman, Thomas Carlyle, Oscar Wilde, and Theodore Dreiser.

His notebooks also contain comments, sometimes caustic, on the political scene. In 1920, expressing his disappointment at the Senate's vote to keep the United States out of the League of Nations, Mr. Burroughs wrote in his daily log, "I am so intolerant of that gang of reactionaries in the Senate, led by Borah and Lodge, that more than ever I would like to see the Senate abolished. Let the House make the laws."

About her grandfather, Mrs. Kelly said, "He was never a one to settle down in one place for very long." He went to Alaska and Yosemite with John Muir, a fellow naturalist and founder of the Sierra Club; to the South with industrialists Henry Ford and Harvey Firestone; and traveled to England and Hawaii.

The principal use of the journals as a part of the Vassar curriculum is for study as an important part of American literature and as a resource for the study of writing on the natural sciences as a literary form. In addition, they are of great value to students and scholars of the ecological sciences and history, and are available to the public by appointment. The only other extensive collection of Burroughs material in institutional hands are his notebooks from 1854 to 1876, in the Berg Collection of the New York Public Library.