On April 26th, 1902, Vassar participated in its first intercollegiate debate. The debate was held at Wellesley College on the topic "Resolved: that the United States should subsidize a merchant marine." Prior to this occasion, the students were repeatedly denied requests to debate with other colleges, as it was thought such rigorous extracurricular activity would take too great a toll on the girls. Furthermore, debate was deemed "utterly incongruous and out of taste" for women. Though both teams were said to have displayed great rhetorical skill, Vassar ultimately prevailed by upholding the negative. When word of the victory reached Vassar that evening, the campus converted into an all-night circus, a roaring cabal of joyful girls, bonded by their collective pride. The following is one student's enthusiastic account of that magical night.

Well you never saw such a crazy place as this college since last night. I don’t think I ever saw such excitement or had such a fine time. The debaters left for Wellesley Friday and quite a lot of girls from here went yesterday morning. You can think what a state the rest of us were in. Every once in a while during the day it would come over us all of a sudden, and take our breath away. About ten o’clock last night – regular bedtime, but of course nobody went to bed – we went over to Main, where the message from Wellesley would come. You know we aren’t supposed to go outside of our buildings after ten, but Dan, our night watchman, said he shouldn’t be looking that night, so we piled over ad libitum. At first there were only a hundred girls sitting on the floor in the hall of Main, near the stairs, fairly getting wild with excitement. You see it’s absolutely the first inter-collegiate contest Vassar has ever been in, and you can’t imagine how we felt. Well, we sat there about fifteen minutes, and then we heard the telephone bell downstairs. You ought to have seen the stampede, Miss Cornwell in the lead. We fairly tumbled down, and crowded around the office door, where Miss Cornwell had gone in. You see, the telephone is in the college office, which has a glass door, so that we could see in, although we couldn’t hear. Miss C. herself was inside the telephone place, so we couldn’t see her, but two of the girls, a Sophomore and a Junior, had gotten into the office door, and we could see them. And yet we that were near enough to the door to watch were afraid to look, for fear any minute we’d see them shake their heads and turn away. It seemed a perfect age. Our fists were shut up tight, and so were our teeth, and we were all breathing hard. I never saw such suspense. Then one of the girls inside came out and said they were connecting with the long-distance telephone at Wellesley, and then we knew it would come soon, good or bad. It took all our strength of mind to keep on watching the girls inside. Well you just can’t imagine how we felt when we saw them both give a wild leap into the air and tear for the door. Such a yell I never heard. Everybody was crazy. We were all howling and running around, and in about one second all the stairs and halls were jammed with girls in all sorts of undress costumes, and everybody yelling and jumping with all her might. We quieted down once Miss C. came out with the official message from Caroline Sperry, the President of the Students’. It said ‘Vassar won. It was an 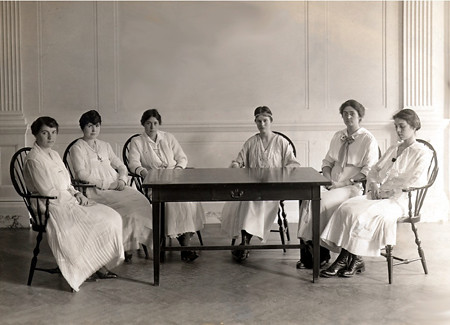 By 1914 the debate team, here in the new Students' Building, was a Vassar fixture

"even debate." You never saw such wild girls. We had to get out somewhere, so we started for the front door, starting up ‘The Rose and the Gray,’ and singing it as I suppose I’ll never hear it again. I think it would have made you cry, the way the regiment does. When we got outside we saw a bonfire just outside the Lodge, with girls dancing around it, so we tore down, and soon about the whole college arrived. Our class was tickled to death, for it was a Sophomore who started the fire, and our President led the yelling. (Incidentally, therefore, hurrah for 1904!) Well we yelled for everything we could think of – nine cheers for Vassar, Wellesley, the debaters altogether and separately, the debate committee, and then the whole thing over again, with Wellesley’s own song – yell, and "The Rose and the Gray," and "Hark, Alma Mater" in between, till our voices were absolutely gone, and then we started again, and cheered Prof. Bawden and Prof. Pilcher, who brought a barrel for the fire. As I’ve said, I never saw anything like it before. Of course we have always sang our songs enthusiastically, but I tell you its different when you get the whole college outdoors, at night, half of them in kimonos and raglans , around a bonfire, and everyone singing as though her life depended on it, and waving hands and handkerchiefs around our heads when we got to "Drink we our Alma Mater." It had to come to an end finally, but we began it again in the different buildings. Raymond yelled on the steps outside before we came in, and then we all fled upstairs to third and fourth, where we made all the racket we could, and good and plenty that was, as you will agree when you think of girls yelling and doing war dances up and down the halls, blowing horns, beating on gongs and chafing-dish covers, and banging chairs on the floor....

We went off walking to let off some of our surplus energy, and were saying how much better this is than to have won at anything like basketball. Think what 1901 missed! Think how dreadful it would be to have gone to any other college! Whew! I don’t know what we are going to do when the debaters come home tonight, but I wouldn’t miss it for a fortune. Just think how those three girls will feel, coming home to a time like this. I pity the poor wretches in the infirmary, who miss it all.