You are here: Home / Notable Events / The Founding of The Seven Sisters

The Founding of The Seven Sisters

Nicknamed The Seven Sisters, the consortium of women’s colleges— Barnard, Bryn Mawr , Mount Holyoke, Smith, Radcliffe, Vassar, and Wellesley—was officially formed in 1926 in order to combat "the…crisis which the women's colleges [were] facing," namely, the difficulties women’s schools were having in raising endowment money sufficient for the desired caliber of education for these early 20th century young women.

Originally, the group was comprised of only the four colleges—Vassar, Wellesley, Smith, and Mount Holyoke—that had been called together by Vassar President Henry Noble MacCracken on October 16, 1915, the day after his inauguration, in an attempt to work together "to deliver women opportunities for higher education that would improve the quality of life for the human family and that would put them on an equal footing with men in a democracy that was about to offer them the vote." In these early years, the Four College Conference worked to implement new standards in admissions.

The success of this early and informal association of colleges led to a more formal and enlarged group in 1926. This group of schools, the "Seven Sisters," was supposedly nicknamed after the Pleiades, the seven sisters from Greek Mythology, which symbolized the alliance formed by these institutions of higher education. The Seven Sister schools were supposed to be the female counterparts to the male Ivy-league colleges, a connection that served them well as they strived to make the quality of education for female students equal to the education of men at the "best men's colleges of the day." The Endowment Campaign of the Seven Colleges in 1928 declared that "the work of [the] committee [was] undertaken in the interest of all higher education for women."

The first and most important order of business on the Seven Sisters' agenda was to "secure a common fund which [would] be used for the increase salaries so that they [would] more nearly equal the salaries of professors in the foremost colleges for men." After MacCracken pledged $1000 at the first joint meeting on September 15, 1926, he and the other members of the Seven Sisters took inventory of their current situation. Consideration of the endowments of the Seven Sisters' and the Ivy's recognized that while the endowments of the top men's schools together came to about $319,000,000, the Seven Sisters' endowments totaled only $36,000,000. Led by MacCracken, this newly formed group of schools launched a campaign to "call attention to the desirability of more generous public support of educational institutions of this character." To "increase salaries in order that the women students may be taught by scholars of as high quality as those who instruct their brothers," each one of the Seven Sisters needed to raise money for its endowment.

The Seven Sisters continued through 1935. As Elizabeth Daniels notes, during this time “the organization formulated a bevy of fund-raising plans in a concerted effort to put the financial needs of the women's college before the public." However, the colleges did not only collaborate on financial matters. At the fourth annual meeting of the alumnae clubs of the seven associated colleges hosted at Vassar, for example, the general subjects of the meeting were "trends in the undergraduate today," ranging from issues of "self-government" to "Greek games" to the "community church" to the "use of leisure" time. 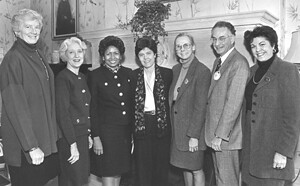 Vassar, Wellesley, Smith, Mount Holyoke, Barnard and Bryn Mawr continue to this day to share bonds and work together. The Seven College Conference is held every year, rotating among the traditional Seven Sisters as host. Each institution always sends its president, dean of the faculty, dean of the college, a faculty member, and a representative with responsibility in the area of the conference’s theme, which varies each year. The topic for 2006-07 was the “value of the Seven Sisters brand,” and the previous year’s Conference, hosted by Vassar, discussed “diversity, equity, and achievement.” For the last two years, Radcliffe has not attended the Conference as it has ceased functioning as a liberal arts college. However, while the other institutions have all changed with time (Vassar, for example, is now coed, which means that issues of single sex institutions that might naturally arise at these conferences do not apply to the college), the Seven Sisters still share enough of a history and similarity in size and style to make exchanges between the institutions productive and important.

John Feroe, Assistant to the President, 1 May 2007