You are here: Home / "Monumental Honors": The Founder's Wish Fulfilled After 139 Years 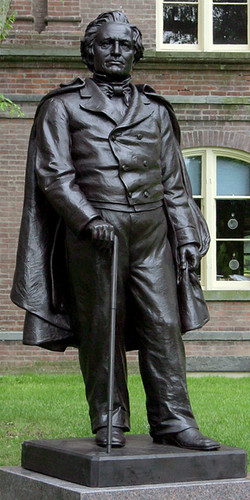 The finished statue of Matthew Vassar

On December 19, 1867, Matthew Vassar wrote to Stephen Buckingham, a member of the trustee committee appointed to commission a commemorative statue of him. "It was never my wish or desire," he wrote, "to have the...work executed during my life time, whatever the Hon. Board of Trustees might deem proper to do thereafter." Beneath the Founder's modesty lay an interest in a "monumental statue" that predated by decades his determination to create a landmark in women's education. Travelling in England in 1845, he had visited the famous Guy's Hosptial in London, founded in 1721 by an ancestor, Thomas Guy. Reflecting on the broad and durable effects of his kinsman's philanthropy and noting Guy's bronze statue in the great building's forecourt, Vassar, according to his friend and first biographer Benson Lossing, developed "a fixed resolution to devote a large portion of his own fortune to the welfare of his fellow-men." The day before he wrote to Buckingham, Vassar had, in fact, written to the statue committee offering, "in case the work should be begun this ensuing spring," to "loan the College on the first of May on thier [sic] B & Mortgage @ 7 pc...for the monument or a part thereof the sum of Twenty five Thousand dollars." Vassar died on June 23, 1868, his offer still pending.

One hundred thirty-eight years later, on Friday, June 9, 2006, the Founder's desire was at last fulfilled when President Frances Fergusson unveiled a statue of Vassar, mounted on a granite pedestal, on the inner lawn near Main Building South. The bronze statue, based on a plaster maquette of the Founder modeled in the 19th century by Poughkeepsie sculptor Laura Skeel Hofmann Pomeroy (1833-1911) and enlarged and refined by sculptor David Frech, was cast at Tallix Art Foundry in Beacon, New York.

The maquette is one of two of Vassar by Hofmann that were discovered in the Library in 1999 during its renovation, after languishing, virtually forgotten, in various storage spots on the campus. Recognizing their historical significance to the college, Frances Lehman Loeb Art Center director James Mundy sent the crumbling plaster to conservators to be stabilized. During the time the maquette was away, the Art Center received a visitor, James Storrow, who was interested in works by another local artist, George Bissell. After viewing the Bissell sculptures in the collection, he was shown images of the recently acquired maquette, at the time attributed to Bissell as well. Upon seeing these images, his thought was, "How piquant it would be: the seventh generation finishing what their antecedents began." Shortly thereafter, he wrote to the President of his idea to fulfill Matthew Vassar's wishes, and she responded with enthusiasm.

It was important, however, to learn about the maquette's origins, and Joann Potter, Loeb Art Center curator, and Elizabeth Daniels, college historian, searched contemporary trustee minutes for any light that could be shed. In 1845, Vassar had returned to his native England, where he had found a precedent in London for both his founding of the college and his wish for a statue of himself. In an unpublished manuscript, he recorded that in April of that year "while in London I visited the famous 'Guy' Hospital, the founder of which [was] a family relative…my nephew John Guy Vassar had the honor of being named after. Seeing this building, with its statue of its founder Thomas Guy, first suggested the idea of devoting a portion of my estate to some charitable purpose, and about this period [I] took quite an interest in a niece of mine, Lydia Booth, who was then engaged in a small way in the tuition of children resulting in after years in the opening of a female seminary in Poughkeepsie…. The force of circumstances brought me occasionally in business intercourse with my Niece, which will account for the early direction of my mind for the enlarged education of women.…"

Vassar had commissioned Benson Lossing, a founding trustee of the college and a popular historian, to write a book about his life and interests up to the founding of the college. This book, Vassar College and Its Founder, had appeared in 1867, after the college had opened, and presentation copies were given to trustees and others. Vassar had also commissioned Charles Elliott, a New York painter of note, to paint his portrait in 1861. In the portrait Matthew Vassar, standing in a commanding position, proudly presents architect James Renwick's red brick college building (Main) for all to see. It thus followed that he might want a statue like that of his English relative.

His desire must have been made public, because on September 17, 1863, Josiah L. Young of 20 Liberty Street, Troy, New York, who described himself as an "artist." and "a sculptor" wrote, asking if he could model Vassar's likeness in marble and place it "within or in front of the institution you have so liberally endowed…that the lineaments of so generous a patron might not pass into oblivion but remain to bless the eyes of those who shall be recipients of those opportunities years after you have passed away to dust." Young offered references and said the cost would not be great. Vassar replied that he was in feeble health and that he had given the matter to the Executive Committee, who would probably want to know how much it would cost. Still, Vassar asked if posing as a model would be tiring and if his figure could be copied from a life sized figure on canvas. Young wrote to the Executive Committee and submitted a list of prices. There is, however, no further extant reference to Mr. Young.

The next mention of a possible statue occurs in a resolution in the Board of Trustee Minutes for June 25, 1867: "that the Board consider it very desirable that a bronze Statue of the Founder should be placed in a conspicuous place on the College Grounds." The matter was then referred to the Executive Committee, "with power"—that is, with leave to carry the project forward at their discretion. The Executive Committee, in turn, formed still another committee to nominate or appoint "three or four persons to be on an artistic committee to decide on the merits of works."

Six months later the Committee on the Founder's Statuette reported that they had corresponded with an artist on the subject who had confidentially expressed his opinion, and therefore they reported favorably in writing, apparently on a "statuette molded by Mrs. Laura S.Hofmann as a study for a larger work in marble or bronze," with which favorable report, the Committee "respectfully reported," they had "performed their duty." They added that they thought "she should be given the commission to proceed without delay to the higher work" (October 17, 1867). In December, Vassar offered to loan the trustees, who were stalled on funding the statue, $25,000 "to pay for the monument or a part thereof," at 7% interest.

Matthew Vassar died at the trustee meeting on June 27, 1868, while reading his final speech. Presumably the vote to refer the commission and the location for the as yet unexecuted statue to the "Salaries and Expenses" committee preceded the referral, but that is not clear in the minutes. On Friday, August 7, 1868, the committee's referral to "S and E" was placed on file, from where it apparently was never retrieved.

In 1877 the trustee minutes noted the following motion: " Whereas, Matthew Vassar, having become a great public benefactor by founding the first College of the kind in the World, is in the opinion of the Board, entitled to monumental honors, the Committee on Arts " should consider this matter and report to the Board by Commencement time about "said statue, etc." The Board added that Hofmann would likely attain a higher excellence in a work of this kind after she had completed her "proposed professional studies in Europe," and thus there would be" further delay." The Board added that another reason for delay was that the founder's estate would take three or more years to close. The much-litigated settlement of Matthew Vassar's estate, however, did not yield any funds for implementation of the long-tabled motion.

Although James Storrow's original "piquant" notion had been for a long-delayed completion of a statue of Vassar by George Bissell and although it was clear that the maquette that had been discovered was by Laura Hofmann (who had, by 1878, become Mrs. Pomeroy), he found that "the concept of finally casting Matthew Vassar in bronze had taken on another life, had changed from being an homage to George Bissell to something else altogether." A board member at Springside, Matthew Vassar's summer home, Storrow found "the idea of a second copy of the Vassar statue to go somewhere at Springside had tremendous appeal to me and became sufficient motivation to keep the project underway…."

His generous pledge was matched by the Vassar Class of 1969, and the process of enlarging, refining, and casting the bronze statue began. As Storrow describes it, the project "began with making a second plaster the same size as the now-restored original… as the mechanical enlargement process can sometimes damage the original…. Once the second plaster copy was made, a large pantograph was used to bring the piece to life size in clay, a process that took a couple of months." The enlarged clay model, however, "didn't generate a lot of enthusiasm," as "Matthew appeared rather malproportioned and clumsy; a great deal had been lost in the translation, in the enlargement. In normal circumstances the sculptor would refine the clay, but Mrs. Pomeroy…was unavailable."

Fortunately, the young figurative sculptor David Frech happened to be at the foundry when the enlarged model was reviewed, and although no specific comment was made at the time, Mr. Storrow notes that "after a few days' thought it was decided that Mr. Frech should be engaged to see if he could improve our Vassar." The clay figure was carefully refined and then cast, using the cire perdu or lost wax method, in which a wax version of the model is encased in sand and melted out, leaving a mold into which the molten bronze is poured.

On April 7, 2005, the statue was cast in pieces, which were then welded together.

The welds were then "chased"—ground and finished to blend in with the surrounding metal—and the piece was then "patinated"—treated with heat and chemicals to achieve an appropriate overall patina.

By his own account in 1845, Vassar decided to devote his time and money to "some charitable purpose" when he reflected upon Guy's "building, with its statue of its founder," and the completed project seems to have survived for nearly 150 years on a similar, remarkably persistent, interplay of intention and serendipity. Vassar's strong desire to be figuratively present near the building he created was unconsciously echoed in the continued, if haphazard, actions of any number of unidentified Vassar personnel in preserving Hofmann's fragile maquette as well as in the perseverance of James Storrow, who chanced upon it while looking for something else. Similarly, the librarian who most recently saved it was engaged in something else, as was the statue's ultimate sculptor, Frech, when he came to the attention of the project's supporters at the moment of their disappointment with the enlarged clay model. This long process gives special meaning to the impressive figure of Matthew Vassar, resting permanently on the campus that he created.

A salute to Vassar in Vassar, MI

It happened that the first contact at Tallix, the bronze foundry, was with a young woman named Meredith Roedel. In an unbelievable coincidence, she was from a small town of 2,500 in Michigan...named Vassar in 1849 by one of its founders, after his uncle Matthew. It was instantly obvious that the new half-size plaster, made to be used in the enlarging process and now surplus, should end up at Vassar Michigan.

Contact with the historical society there was made, and consequently the plaster made a trip to Michigan. It was unveiled to speeches and music by the town's brass band. JS