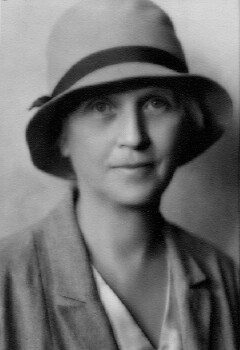 In 1920, Martha Beckwith became the first person to hold a chair in Folklore at any college or university in the country. The Folklore Foundation, established at Vassar with an anonymous donation by the naturalist, Annie Alexander, was an unprecedented institution. With its establishment, Vassar College suddenly became a center of research in the almost entirely new field of folk culture.

The idea of collecting, evaluating, and comparing folklore was new in the early twentieth century. For Beckwith, "folklore" included popular idioms, beliefs, slang, songs, or stories that circulated in various versions through communities, although her definition of the word was somewhat different from that of other scholars. While many early folklorists believed that the term "folk" only referred to the oral culture of "savage" peoples, Beckwith maintained that all cultures had folk traditions that warranted investigation. Many scholars also drew a firm line between "folk" and other "higher" forms of artistic expression. Beckwith believed both belonged in the literary tradition.

Beckwith was born in 1871 in Wellesley Hills, Massachusetts but moved to Hawaii while she was very young. Her parents were schoolteachers, and encouraged her childhood interest in Hawaiian folk dancing, which eventually evolved into an interest in all forms of Polynesian folklore and folk culture. In her guide to Hawaiian folklore, published in 1940, she recounted, "This guide to the native mythology of Hawaii has grown out of a childhood and youth spent within the sound of the hula drum at the foot of the domelike House of the Sun on the windy island of Maui. There… we were aware always of a life just out of reach of us late comers but lived intensely by the kindly, generous race who had chanced so many centuries ago upon its shores...."

She received her B.S. from Mount Holyoke College in 1893 and completed her Ph.D. in 1918 at Columbia under the direction of Franz Boas. Commonly known as the father of American anthropology, Boas remained close to Beckwith for the rest of his life. After she completed her Ph.D., her childhood friend Annie Alexander offered her a five-year fund to continue her graduate research in Hawaiian folklore. Beckwith, who had worked as an English instructor at Vassar for four years before completing her Ph. D., now approached the Vassar English department and asked if it would be interested in administrating the grant. The department agreed, and hired her as the research professor of the new Folklore Foundation and as an Associate Professor of Comparative Literature. During her eighteen years at Vassar, her work became renowned and well distributed. She published a large number of books and articles on everything from ballads, to riddles, to folk games. By 1929, she achieved full professor status, which she held until she retired in 1938.

For the most part, Beckwith seems to have had a very positive relationship with the college. Vassar provided her with a space to teach, while allowing her enough flexibility to travel and conduct her research. In 1923, she took a trip with Alexander to visit, as she told the college, "places of archaeological interest in England, France, and Spain." During her sabbatical year of 1926-27, she studied folk literature in Italy, Greece, Palestine, Syria, and India. For the most part, however, she focused her study on Hawaii, Jamaica, and the Sioux and Mandan-Hidatsa Native American Reservations of North and South Dakota. There, she collected folklore from anyone willing to speak with her. The longest trips were to Hawaii, where she worked for the Bishop Museum while collecting local folk tales and songs. She became friendly with the people she met wherever she was. Her three summer trips to the Mandan-Hidatsa Native American Reservations made her close enough to the members of the Prairie Chicken Clan that they decided to induct her.

Despite the fact that her seminar classes remained small, ranging between two and thirteen students each semester, a number of its graduates later embarked on successful anthropological careers of their own. For the talented and interested student, Beckwith was an amazing resource. She emphasized fieldwork, sending seminar students to gather folk expressions and tales from the residents of the Hudson Valley area. She took folklore students traveling with her during the summer to do field work in the Dakotas, or encouraged them to do research on their own. She even remained in contact with many of her students long after graduation, attempting to find them graduate schools, funding, jobs, or publishers. This dedication, however, was directed at a relatively limited percentage of the student body. Years later, the college would note rather fondly at her memorial service, "[Beckwith] was an inspiring teacher of the comparatively few students she recognized as promising, but she was no more interested in the average student than she was interested in the political and social problems of modern life."

It is true that she was as unmoved by political questions as she was by mediocre students. Although she worked among the Sioux for years, when the Bureau of Indian Affairs asked her opinion on private versus communal lands on Native American Reservations, she claimed that she was uninterested in politics and had confined her study to culture during her visits. True, she accompanied this disclaimer with a long essay on the communal tradition in Native American culture, but the article presented academic considerations rather than political opinions. In many ways, she embodied the ivory tower intellectual: utterly devoted to her work, but uninterested in the outside world.

However, she did not entirely lose herself in the black hole of research. She held important positions in a number of folklore and anthropological organizations. Whether she was acting as president of the American Folklore Society or simply participating in the ballad committee of the Modern Language Association’s Popular Literature Group, she always was one of the most active members of the group. She did not lack for correspondents either; she was in constant contact with many leading anthropologists and folklorists. Moreover, she received a multitude of letters from many different kinds of people interested in folklore, asking for her opinion, support, or her name on their club’s board.

Due to funding problems, the Folklore Foundation closed when Beckwith retired, and much of her work was forgotten after her death in 1959. Its legacy is somewhat ambiguous. Almost all early anthropology contains a racist undertone; the words "savage" and "pre-historic" usually pepper the rather condescending descriptions of the cultures under investigation. Beckwith’s work certainly employs this kind of vocabulary, but because she spent more time collecting and translating than commenting, it is less prevalent. Moreover, despite her condescension, her great affinity for folk tale and folk culture is always present in her scholarship.

While her attitudes have tainted her work, her research opened up new forms of cultural investigation. She recorded tales from Sioux elders that were dying with twentieth century assimilation; without her intervention, these stories probably would not exist today. Many of the versions of the Hawaiian myths she transcribed would have also disappeared. When most anthropologists were only interested in analyzing "uncontaminated" cultures minimally affected by western contact, she was one of the first to study Jamaica, fascinated by its mixture of English and African elements. Her last and greatest work, The Kumulipo: A Hawaiian Creation Chant which she translated, edited and commented upon, is still used by universities in Hawaii.

Stein, Barbara. On Her Own Terms: Annie Alexander and the Rise of Science in the American West." Berkeley: University of California Press, 2001.