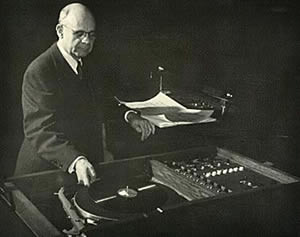 George Sherman Dickinson, affectionately known as "Dicky," served as Professor of Music, Music Librarian, and Chair of the Music Department during his thirty-seven years at Vassar. Born in St. Paul, Minnesota in 1888, Dickinson went on to attend Oberlin College as an undergraduate. In 1909, he received an A.B. from Oberlin, and one year later the same college granted him a Mus. B. Then, after being granted an A.M. from Harvard in 1912, Dickinson began what would become a lifelong infatuation with travel-study. While researching with Hugo Kaun and Paul Juon, Dickinson visited Berlin, London, Paris, Vienna, and Munich. He began his career at Vassar in 1916, however, working as an Assistant Professor of Music, after having taught music theory, organ, and the history of music at Oberlin.

Dickinson had an auspicious start to his time at Vassar. He taught "Music Theory" and "Music Appreciation and History," two classes which he later merged into a single "Music History" course. Dickinson shifted the emphasis from factual history and appreciation to "the historical study of music as a progression of styles, explained in aesthetic terms and treated by critical methods." After becoming an associate professor in 1919, Dickinson's classes began to garner something of a "cult" status – students began attending in swarms. This is not to say Dickinson was an easy professor; on the contrary, students knew Dickinson expected from them only their most intelligent and original work. Whether teaching the introductory class "Music as a Literature" or the more advanced courses "Aesthetics and Criticism" and "Advanced Studies in Style," Dickinson became known for using a "highly expressive tone" and an "abstruse vocabulary of aesthetics" in the classroom. At times, he would ask students to analyze literature in order to better understand the tonal and emotional qualities of certain pieces of music. Students would read aloud from Tristan and Isolde and Romeo and Juliet, or they would listen to Dickinson recite lines from the German romantic poets and librettists.

In 1922, Dickinson was granted full professorship and his involvement in college activities increased heartily. He edited the college catalogue for a number of years in the early- and mid-1920's, and in 1925, he invented an entirely new system of music classification for the Vassar music library. A number of colleges (including Vassar) continue to use Dickinson's classification system to this day. Largely due to his efforts in organizing the library, Dickinson became Music Librarian in 1927, a position he held until his retirement. During his reign as Music Librarian, Dickinson turned Vassar's music library into one of the most prestigious in the country. At this time, the indefatigable Professor Dickinson also served as Chairman of the Committee on the Catalogue. While doing so, he established a new typographical design for the catalogue, which the college used for decades.

Without question, Dickinson's most conspicuous contribution to Vassar at this time was his design for the Skinner Hall of Music. Between 1929 and 1930, Dickinson worked tirelessly to plan the new music building. From the outside, the building looks like an enormous gothic castle – spires rising up behind towering willows and pines, heavy wooden doors, and cool grey stone; as you walk towards it and cross the short bridge just beyond the Shakespeare Garden, you fell as if you are advancing upon some timeless sanctuary, hidden form the main Vassar campus. The exterior was modeled after a Loire Chateau in Hattonchatel, a spot restored with the largesse of Belle Skinner, Vassar Class of 1880. Inside, however, and particularly at Dickinson's time, Skinner Hall boasted significant technological advancements. Dickinson outfitted the hall with record players, automatic record changers, tone controls, a fourth-floor sound studio for recording and broadcasting music, a "stereopticon" for slides, a moving picture booth, a new music library, soundproof practice rooms, and a museum of instruments – home to numerous harpsichords, clavichords, and antique pianos. After Skinner Hall opened in 1931, Dickinson became known for putting Skinner's technology to use; he could often be found operating multiple turntables, adjusting tone levels on a mechanical piano, or playing bass notes on organ pedals while projecting the synchronized score upon a white screen. One year after Skinner opened, Dickinson became Chair of the Music Department, a position he held for twelve years.

While at Vassar, Dickinson contributed frequently to college committees and he published quite widely. In addition to his work with the Committee on the Catalogue, Dickinson offered his services to the Advisory Committee, the Committee on Graduate Study, the Committee on Conference with the Trustees, and the Curriculum Committee. He lectured at Harvard and the University of California as an authority on tonality, and in 1935, Oberlin College awarded him an honorary Mus. D. degree. Dickinson also served on the board of editors for Columbia Studies in Musicology (1933-53), as an executive committee member of the Music Teachers National Association (1936-38), as vice president of the American Musicological Society (1936-37, 1941-42), and as president of the Music Library Association (1939-41). His publications include Foretokens of the Tonal Principles (1923), The Growth and Use of Harmony (1927), Classification of Musical Compositions (1938), and The Pattern of Music (1939).

By the time Dickinson retired in 1953, the music faculty had doubled from the eight members it comprised when he arrived in 1916. At the time of his retirement, Dickinson had taught over 6,000 students. Many of these students went on to spread music appreciation throughout their respective communities; several pursued graduated studies in music, while others went on to teach, write, or compose music. "The recompense in teaching," Dickinson said, "is found in passing something on so much better than one's self that one is in a measure honored through his identification with it." Dickinson often stayed in touch with Vassar alumnae, eager to hear to what extent the study of music had patterned their adult lives. To him, the study of music necessarily went beyond aesthetic analysis and the placing of musical compositions in a historical setting; music became "a kind of spiritual oxygen necessary to existence for some" – a means of living and of experiencing life with greater intensity. More than anything, Dickinson strove to "stimulate the flow" of such spiritual oxygen; he aimed to expose students to the study and history of music, without compromising the given student's ability to wonder and create, to explore and imagine.

After retiring, Dickinson moved to Chapel Hill, North Carolina, where he remained in contact with Vassar faculty and alumnae, and where he continued his own research into tonal principles. When he died in 1964, he had just completed his Handbook of Style in Music.

History of the Vassar Music Library