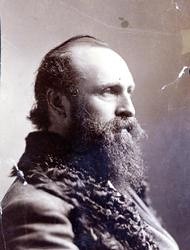 Frédérick Louis Ritter joined the Vassar faculty as head of the School of Music in 1867, upon the departure of Edward Weibé, and under his tenure the music program grew in breadth, skill, and renown. Born in Strasburg in 1832, Ritter made his public piano debut at the age of 18. He immigrated to America where he established the Cincinnati Philharmonic Society and the Cecilia Choral Society. In 1861 he moved to New York City, where he became head of the Harmonic Society. While in New York, he married his second wife, Fannie Raymond, who was "an accomplished singer and a woman of rare literary and musical talent." In 1867 he conducted the first music festival in New York City, which took place in Steinway Hall. He joined the faculty of the college in that year, but did not move to Poughkeepsie until 1874. During his entire tenure at Vassar, he was the head of the School of Music and often conducted concerts and performance around campus (See School of Art & Music).

Ritter was a capable and prolific scholar, receiving his Doctorate in Music from the University of New York in 1878. In addition to teaching piano, composition, music theory, and singing at Vassar, Ritter wrote numerous books with his wife. A collection of these books , which were written for use by his students, is housed in the George Sherman Dickinson Music Library and includes such titles as: History Of Music in the Form of Lectures (1876), Music In America (1883), The Student's History Of Music, The History Of Music, From The Christian Era To The Present Time, (1884), and Practical Harmony, Especially Designed For The Use Of Piano-Forte Students, (1888). His full music library was purchased by Albert Metcalf and given to Tufts University.

A well-loved professor, he was described in the Catalogue of 1870-1871 as a "gentleman of the first rank in the profession [who] aims at the highest standards of classical culture, both as to taste and execution." Ritter died in 1891, and after his death, as part of a broad curricular revision, the School of Music was discontinued and the study of music continued through an academic department.

Obituary from the Poughkeepsie News-Press 7 July 1891: “Death Came to Him Suddenly at Antwerp – A Brief Story of a Brilliant Career – Vassar College Loses the Maker of its School of Music; Poughkeepsie Loses a Prominent Resident, and the World Loses a Benefactor-An Outline of His Life’s Work”.

Letter from Bibliographer to Mr. Harold Lineback on January 20, 1950. (Located in the ).