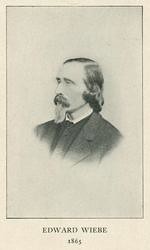 A native of Germany and the first professor of music at Vassar, Edward Wiebé taught at the college from its opening in 1865 until 1867, when he went to teach at Mount Holyoke Female Seminary. In A History of Music at Harvard to 1972 (1988), Harvard musicologist Elliot Forbes identifies Wiebé as the first professor of music in the United States. Martha S. Warner’68, one of Vassar’s first students, wrote to her mother “we are going to have a concert here Friday night. Prof. Wiebé is anxious to prove to the world that music can be taught in classes.” Professor Wiebé’s wife, Julia, also taught music, and they enjoyed frequent visits from Germany from their daughter, Marie. The German accent of all three Wiebés was often the subject of raillery by students. Frances A. Wood, a Vassar music teacher (1866-1870) and librarian (1880-1910), noted in Earliest Years at Vassar (1909) that Wiebé’s “speciality was singing. He had a delightful voice and method, and organized the ‘vocal club’ of that time.” InThe Golden Age of Vassar (1915), Mary Norris’70 described Professor Wiebé as “a nervous, ambitious, strenuous man, conscientious, with the pioneer’s unthankful work to do.” “One day,” she recounted,“while striving to incite a spirited girl to special activity to follow a method which did not appeal to her, he said, finally, ‘You Americans are not like the young ladies of my country. Dey persevere, dey do egzactly as I tell them to do.’ ‘Professor Wiebe,’replied the student, after a moment of white and haughty silence, ‘I have no desire to emulate the example of foreign ladies.’”

Before coming to Vassar, Wiebé engaged in musical activities in Brooklyn, New York, directing the Philharmonic Society and serving as musical conductor and leader of the choir at the Clinton Avenue Congregational Church. In 1857, he wrote the sheet music for Wiebé’s Music for the Million: A Series of Popular Songs, Ballads, Waltzes, Polkas, Duetts, etc. The lyrics, in both English and German began: "How bitter is the sad farewell of friends, when forc’d to part/ How quick the starting tear betrays the anguish of the heart/ There is but one consoling thought, That charms away our pain/ It is the fond enduring hope, That we may meet again.”

One of Wiebé’s notable contributions to Vassar was his composition of the music for a song written by special student Julia Tutwiler for the first Founder’s Day in 1866. He played the organ while the students sang as Matthew Vassar approached the college. According to his granddaughter, Minnie Wiebé, he also wrote the music for a song by Sarah Stilson’69, a student friend of the Founder, and sang with her during the festivities.

Shortly after leaving Vassar, Edward Wiebé became well-known for introducing the German practice of “kindergarten” to the United States in his book, The Paradise of Childhood: a manual for self-instruction in Friedrich Froebel's educational principles, and a practical guide to kinder-gartners, first published in 1869 by the publisher and board-game entrepreneur Milton Bradley and kept in publication by his firm for nearly fifty years. In the introduction, Wiebé spoke of his devotion to the furthering of education. He was, he said, “acquainted with Froebel; and his subsequent experience as a teacher has only served to confirm the favorable opinion of the system [kindergarten]. . . . A desire to promote the interests of true education, has led him to undertake this work of interest and interpretation and explanation.”

Forbes, Elliot. A History of Music at Harvard.Cambridge, Mass., 1988.

Wiebé, Edward. The Paradise of Childhood: a manual for self-instruction in Friedrich Froebel's educational principles, and a practical guide to kinder-gartners. Springfield, Mass.: Milton Bradley & Company, 1880.