Vassar’s first chair of physiology and hygiene and resident physician, from 1865-1874, Alida Cornelia Avery, made a strong impression upon students and faculty during her nine years at the college. A highly-respected physician throughout her life, Avery was not only a prominent suffragette but the first woman to practice medicine in the state of Colorado. 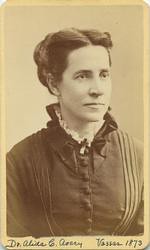 Dr. Avery was born in Sherburne, NY, on June 11, 1833, to Williams Avery, an affluent  farmer and a deacon of Sherburne’s First Congregational Church, and Hannah Dixon Avery. Descending from a family of physicians and doctors, she was one of eight siblings, including three girls. At the age of sixteen, she taught at local schools, and in 1857, she began her study of medicine as a resident student at the Female Medical College of Pennsylvania (after 1970 and the admission of men, Medical College of Pennsylvania). After a year, she transferred to the New England Female Medical College in Boston (merged with Boston University School of Medicine in 1874) and obtained her diploma as Doctor of Medicine. After graduation, she worked as an assistant physician in a private practice in Brooklyn, New York.

Upon Vassar’s opening in 1865, Matthew Vassar and his trustees selected Dr. Avery because of her reputation among the few female physicians and because a resident female physician and health officer might temper vociferous critics who argued against the education of women due to the supposed fragile female constitution. Avery taught human physiology, which was a requirement for both juniors and seniors, and offered a shorter course for incoming students. She strove to educate students on the nature of the human body that they would be more mindful of their health. From 1866-1874, she also served as the Secretary of Faculty. Dr. Avery's contemporary, a teacher in the music and English departments and, later, the college’s founding librarian, Frances Wood, included an appreciation of Avery in "Earliest Years at Vassar," in The Vassar Miscellany for January 1, 1909, saying, in part: "Among those who contributed so much to the early life of the college and its success, the name of Alida C. Avery cannot afford to be overlooked.  She came in 1865 as the resident physician, was a strong member of the Faculty, high in the confidence and trust of [President] Raymond and [Lady Principal] Miss Lyman and sharing with them the responsibility of that important formative period. So close were the friendly and confidential relations among these three 'powers that be'—hardly ever one appearing without the other—that some irreverent students dubbed them 'The Trinity.'"

Dr. Avery was a proponent of hydrotherapy, a popular theory of the time that used water to cure illness. She strictly regulated the frequency of students’ baths and supervised all food and drink served to them. Her ardent condemnation of corsets as harmful was controversial among the student body, but she was lauded for her healing skills. It is reported that no student died during her tenure at Vassar. Introduced by the author as “the resident physician at Vassar. . .too well known as such, to need any introduction,” Avery, in an essay in Anna C. Brackett’s The Education of American Girls(1874), detailed her success in correcting many of her students’ misconceptions and dismissed the notion that education was unhealthy for women:

“No one thing [at Vassar] has done more to counteract the hereditary or acquired tendency of many young women, to disorders peculiar to their age and sex than the opportunity for pursuing, quietly and continuously, with a definite aim and certain purpose, well-arranged courses of study. I can recall numbers of instances of girls who came to us weak, indifferent, listless, full of morbid whims and uncontrolled caprices of mind and body, who gained in this bracing atmosphere of happy, sustained industry, such an impetus toward real health that they forgot aches and discontents, and went home ready and eager to do their share in the world's work.”

Students, however, were divided in their opinion of Avery; some dismissed her as aloof and strict, while others revered her. In her account “Earliest Vassar, ”special student Louise Taylor Lewton’68 does not hide her dislike of Avery. She remembers encountering Avery during her visit to an ill friend in the infirmary: “I was on my knees by the side of the bed… [Avery] said harshly to me: ‘Get up. Haven’t you any more sense than that?’” Although she does note her medical skills, she dismisses Avery as a having the personality of “Cold Steel… Intellect and ability showed in every line, but there seemed no warmth nor human emotion.” Students also noted that Dr. Avery was especially stern with those who had not come to the infirmary before they had become quite sick. In her diary, Lilla Thomas ’73 recalled going to the infirmary with a cough: “I went and her ladyship was exceedingly haughty, refused to give me any medicine because I had not come before (at first) and said that the best thing for me to do was to go home and stay there until I recovered. I went to my room and had a good cry as I did not want to go home.”

In her book, Earliest Years at Vassar, Frances Wood defends Avery’s stern demeanor, suggesting that “much of her stiff professional etiquette resulted from the idea of upholding the equality of women physicians with men in the same calling, and being over sensitive to indifference and snubs. The early women pioneers in medical work did not find it a bed of roses, but they persevered. . . . To those who came to know her well she showed a lovable human side, a big heart, capable of most generous affection.”

Those students that did spend time with Avery also gradually saw a pleasant disposition. In an 1867 letter to her mother, Martha Warner’68 wrote “I didn't suppose that Miss A. would be nearly so much at home or so pleasant in the classroom as she is. I am growing to like her very much.” Although initially wary of Avery—“I congratulate myself that she is not my enemy”—Julia Pease‘75 eventually grew to praise Avery as “very, very pleasant, I grow more charmed with her every time I meet her. She is one of those strong minded women.” In an effort to interact with students outside the classroom, Avery often invited students to tea with and other professors.

Avery was a good friend of Hannah Lyman, Vassar’s first lady principal, and Maria Mitchell, the first professor of astronomy. Avery and Mitchell engaged in a salary dispute with the trustees. Male professors were initially paid $2,000 per year, while Mitchell was paid $800 and Avery $700, although they all lived in the Main Building without being charged rent. They both threatened to resign, and their salaries were adjusted. In addition to teaching and serving as resident physician, Avery enjoyed horticulture. She established the Floral Society and managed the flower garden.

After nine years at Vassar, Avery resigned in 1874 and moved to Denver, Colorado. She opened a private practice and later became the superintendent of hygiene for Colorado, becoming the first woman to practice medicine in the state. By 1877, she was earning $10,000 annually (~$240,000 in 2018). Along with Edith Root and Mary Barker Bates, she was one of the first women to be admitted to the Denver Medical Society. While living in Denver, she opened her home to distinguished guests including Lucy Stone, Susan B. Anthony, and Maria Mitchell, who came to Colorado, along with Vassar students, to observe the solar eclipse of 1878.

Avery retired in 1884, and her involvement in organizations increased. Long lauded for advocacy for women’s rights, she became the first president of the Women’s Suffrage Association of Colorado in 1876. Avery and Albina Washburn, a columnist for Denver’s Labor Enquirer, led the 1877 referendum campaign for suffrage in Colorado. She designed the strategy to win the vote, arguing that women’s responsibility in the home prepared them to vote and that women’s votes would further the practice of reason over violence. Avery was also active in the Association for the Advancement of Women, the Unitarian Church, and the Woman’s Christian Temperance Union. After her death, in 1908, The Sherburne News reported that Avery had written in her journal: “I have given up medical practice, and busy myself with affairs of general interest, Church, W.C.T.U, Woman’s Enfranchisement, etc., and as I am made secretary of nearly every organization that I join, it goes without saying, that whatever Cacoethes scribenda [mania for writing] I may have had earlier in life has been effectively eradicated by application of the homeopathic principle, similia, similibus curanter [let like be cured by like]. As a member of the First Unitarian Church of San Jose I strive to make the legend on the cornerstone of that edifice, ‘Worship of God, Service to Man,’ my guide and inspiration.”

In 2019, "credited for her leadership in securing Colorado women the right to vote," she was elected to the Colorado Woman's Hall of Fame.