You are here: Home / Documents and Views of Early Vassar / Top Hat Scandal

In 1864, one year before Vassar Female College opened to the public, Milo P. Jewett tendered his resignation as college president, citing an "interrupt" in "the entire harmony of views and feelings" between himself and Matthew Vassar. Although his obituary claimed Jewett left due to "a failure of eyesight" and a more recent writer cited "somewhat impaired health," his departure stemmed from an ongoing feud with Vassar's nephews, particularly with Matthew Vassar, Jr. Even Jewett's earliest letters to the founder reveal his anxiety that Vassar Jr. might dissuade his uncle from founding a women's college, an idea the retired businessman vocally opposed. After meeting Vassar and realizing his yearning to fund an institution that would immortalize his name, Jewett bluntly proclaimed Vassar Jr.'s idea of building a hospital "a very unwise use of money," saying Vassar "might as well throw it into the Hudson River." Later, when laying plans for Vassar Female College, Jewett wrote Vassar, showering him with praise and encouraging him to fund the college independently, noting both nephews' reluctance to "pledge their cooperation" (1) . 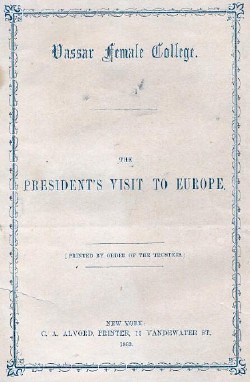 Jewett's mistrust of Matthew Vassar, Jr., was not completely unfounded. Indeed, Vassar Jr. had become wary of what he called Jewett's "persuasiveness and flattery." In 1860, Vassar Jr., with the help of trustee friend and ally Charles Swift, initiated plans for a "Vassar High School" for boys and girls, as well as a public library, curbing Jewett's plans to open Vassar Female College. In retaliation, Jewett wrote Vassar a letter in which he blamed Vassar's nephews for "razing Vassar's magnificent 120 gunship down to a barge" and reminded the retired brewer of the "immortal honor" available to him should he fund a women's college. Clearly, the rift between Vassar Jr. and Jewett had become personal.

In fact, Vassar Jr.'s qualms about Jewett pervades his diary. In 1862, when freshly appointed President Jewett requested a leave of absence to tour Europe, Vassar Jr. denounced the trip, arguing that Jewett's "services [were] required at home" and voicing his concern that his ailing uncle would be left with the majority of the work. Upon Jewett's return from his trip eight months later, Vassar Jr. confided that the president's report on his findings proved "too much and irksome," and he rejoiced in Jewett's proposal to hire professors being "voted down as premature."

The founder's nephew was not alone in his resentment of Jewett. The founder informed Jewett in an early note that he had already "lost friendship with many," but he upheld Jewett's affections to be "sincere and ingenious." And in a 1912 letter to Vassar's president, James Monroe Taylor, Jewett's close friend and business associate S.S. Sherman declared that, "Mrs. Matthew Vassar… was never at all in sympathy with the College."

Jewett took dead aim on his opposition whenever possible. Acting upon an inclination that fellow trustee Rufus Babcock might attempt to usurp his position, President Jewett sent Vassar a detailed letter lambasting the Baptist minister, accusing him, among other things, of being too old and unpopular. (2) In 1864, Jewett finally went too far with his attacks, targeting not only Vassar Jr. and Babcock, but also the founder himself.

After a dispute with Vassar over the opening date of the college, Jewett's correspondences with the founder became more and more heated. In one letter sent in late 1863, Vassar reprimanded Jewett for "lecturing" him on opening the college sooner, writing, " I allow no man to coerce or dictate to me on my course of policy." Having failed to persuade Vassar, Jewett attempted to rally the support of his trustees. In February 1864, he wrote Reverend William Hague a letter, in which he presented Vassar Jr. and Babcock as "conspirators" against him, and called Matthew Vassar "fickle and childish." Jewett then sent copies of the letter to five "non-resident" trustees: Martin Anderson, Nathan Bishop, John Raymond, Ezekiel Robinson, and Elias Magoon. (3)

Reverend Hague arrived at the next Board meeting with Jewett's letter tucked beneath the band of his top hat. After the meeting had adjourned, Hague met with trustee Cyrus Swan and left the Trojan Top Hat on Swan's desk while he visited the restroom. Whether intentional or not, Hague's actions assured Jewett's demise. Swan seized the letter and relayed its contents to the founder, who, heartbroken and disgraced, swiftly requested the president's resignation, noting "the impossibility of any further confidence or harmony between" the two. The president's "evil attempts," as Vassar Jr. privately dubbed them, had finally become public. After several failed attempts to salvage his relationship with the founder, Jewett submitted his letter of resignation to Chairman William Kelly.

The same cunning and ruthless determination that Jewett had once used in convincing Vassar to establish the college had become his ultimate downfall. On April 29, 1864, after a unanimous vote by the members of the Board, Jewett relinquished both his position as college president and as Vassar trustee. When the college opened the following fall, Jewett was completely dissociated from the institution he had toiled to create.

Along with Matthew Vassar's niece Lydia Booth and Vassar himself, Milo Jewett is primarily responsible for the existence of the college. If his tactics in furthering his views on it were flawed, without his experience, vision, and energy, the Founder's ideas would have taken a greatly different path to success— if they had succeeded at all. His place in the history of the college was recognized on Vassar's fiftieth anniversary, in 1915, when President Henry Noble MacCracken and the Trustees renamed the newest residence hall, until then known as North Hall, Jewett Hall.

Minutes of the Board of Trustees, Vassar College Special Collections (VCSC)