You are here: Home / Collections and Curiosities / Tapestries / Cupid and Psyche 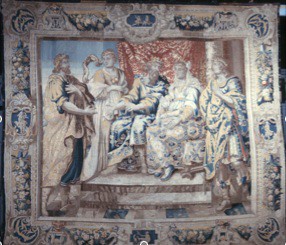 Once upon a time, in a western city, there lived a king and queen with three beautiful daughters. However, the beauty of the youngest, a maiden named Psyche, was beyond imagination. She was seen as an embodiment of Venus, the goddess of love and beauty. The people of the kingdom even erected statues of her and worshipped them as if she were Venus herself (a virginal Venus born of the earth, not the sea).

The real Venus was angered by the neglect of her altars and the attention given to this mere mortal. She summoned her son, Cupid, and bid him punish this upstart. As a result, when suitors came to seek the hands of the young girls, none came for Psyche. All the men were awed by her beauty and afraid of her god-like status. Thus, Psyche was unable to wed, while her two sisters were married off to other kings.

This scene shows the King and Queen sitting on at throne surrounded by two young men, each wearing a crown. The young man at the left is gesticulating and speaking to the king and queen. In the background stands a young woman, Psyche. The two young men in this scene represent two suitors applying for the hands in marriage of the two older daughters. Young Psyche looks on in disappointment, because no one comes to seek her hand; all are afraid of her great beauty.

The Oracle of Apollo 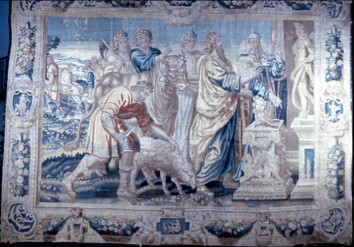 Psyche’s father, the king, correctly feared the wrath of a god and consulted the temple of Apollo at Miletus about his daughter’s future as a bride. This scene shows the king before the statue of Apollo, a servant behind him preparing to sacrifice a sheep to the god. The terrible response to the king’s query was that Psyche was to be placed upon a mountain peak and left to die.

In Apuleius’s story, when Psyche was taken to the rocky mountain crag, she was left alone and she fell asleep. In her sleep, a Zephyr lifted her into the air and floated her down to a soft meadow. Psyche awoke in the meadow of flowers to see a magnificent palace in front of her. When she rather timorously entered the palace, she discovered to her astonishment that all her needs were taken care of, but no one was to be seen. Hands bathed her and dressed her. Voices spoke to her. Food appeared miraculously. In the night, in the darkness, her bridegroom came to her bed and made her his bride. Yet she never saw him; he departed before first light.

Her bridegroom told her that he loved her, but that he had legitimate reasons for demanding that she not look upon him. He also demanded that, should her sisters come to the mountain crag calling for her, she should ignore their pleas. After a time, the beautiful girl found the lack of human contact difficult and she cried for her family. Her lover relented and told her she could see her sisters, but under no circumstances was she to reveal any information about him.

The Visit of Psyche’s Sisters 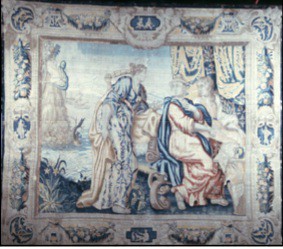 After Psyche (shown standing at center) had lived in the magical palace for a while, she exhorted her husband to let her entertain her sisters. Unfortunately, the sisters, shown here sitting at the right, were consumed with envy for Psyche’s good fortune at living in a beautiful palace, having a life of ease, and having a kind and gentle young man as her husband.

When Psyche pined again for contact with her family, Psyche’s husband warned her again that her sisters were certain to be envious. He warned her not to reveal anything about him, punctuating his admonitions with the warning that she was with child: “Keep our secret and the child will be an immortal, divulge our secret and the child will be mortal.” Still, Psyche begged to see her sisters one more time.

The sisters lied to Psyche telling her that the country folk in the neighborhood had seen a huge serpent. They told her that the serpent was her husband transforming himself each night into a handsome youth. They suggested that she hide by her bed a knife and a lamp, so that she might look upon her husband in the night and, if she discovered that he was a monster, she might cut off his head.

The Quest for Proserpine’s Beauty 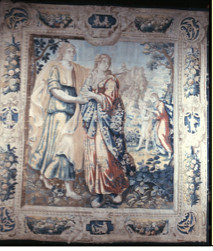 When the time came, Psyche, foolish girl that she was, followed the instructions of her sisters. She looked upon her sleeping husband and discovered a young man of exquisite beauty and realized, at that moment, her mistake -– that she was in fact married to a god, the god Cupid (or Amor, son of Venus). In her confusion, Psyche tipped the lamp just a little, causing hot oil to fall upon the shoulder of the sleeping man. He awoke and realized what had happened, first repudiating her, then fleeing.

Here in the story, the hapless Psyche suddenly became somewhat crafty. She went to her sister and told her that Cupid wanted her as a wife. All she had to do was to go to the mountain crag and throw herself into the air for Zephyr to catch her and take her to the god. This the sister did, but the result was her death. At short while later, Psyche persuaded the other sister of the same tale, leading, in turn, to her death.

Meanwhile, Venus’s anger knew no bounds. She insisted that Cupid never approach the hated mortal rival, Psyche. Venus issued a command that the errant Psyche be brought before her. In time, Psyche was captured and brought before Venus who imposed hopeless tasks, each of which the young woman was able to complete.

The final task assigned to Psyche by the angry Venus was to descend into the underworld carrying a small casket and approach the goddess Proserpine to obtain a bit of beauty to bring back to Venus. After severe travails, Psyche succeeded in this last task, but upon her return she opened the container just briefly, causing the sleep of death to escape and envelop her.

This scene shows two main characters, a tall barefooted woman at the left giving a small vase to the woman in the center. The woman at the left is probably meant to be Venus (the bare feet a modest indication of her traditional nudity), while the woman at the center is the beautiful Psyche, who looks fearfully over her shoulder at the prospect of descending into the underworld. 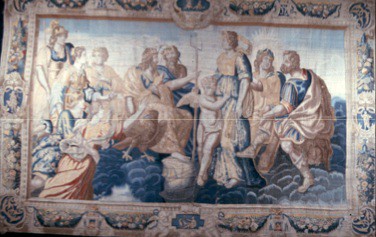 At the end of the story, Cupid, who had been searching for Psyche, found her. He scolded her again for yielding to her curiosity, then flew with her to the heights of Olympus to plead for her future. At the assembly of the gods, it was decided that Psyche would be changed into a goddess. The story ends with the wedding feast of Psyche and Cupid.

At the lower left, the messenger god Mercury brings Psyche to the gathering of the gods at Olympus where Venus (at center) and her son, Cupid (here oddly depicted as a young boy), and the other gods await her.

Deinstallation of the tapestries 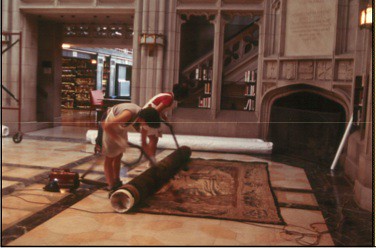 In August of 1998, the set of tapestries were removed from the walls of the library as the first step in a planned conservation project. This photograph shows the initial vacuuming of one tapestry before it was rolled and inserted in a tube for transportation to the Textile Conservation Laboratory of St. John the Divine in New York City.