It seems like a dream, the sudden transmutation of this great lumbering pile of brick and mortar, which hung on my spirit like a mountainous millstone into a place of light and life. President John Raymond's letter to his wife, a few days after the first students arrived at Vassar. September 23, 1865 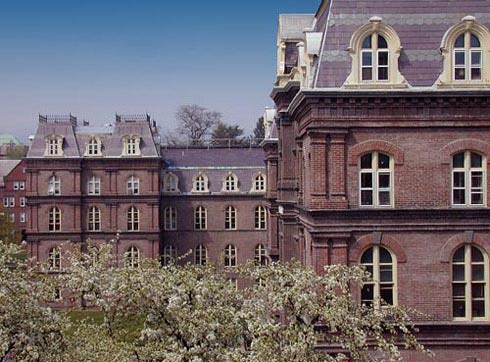 Matthew Vassar's idea of a perfect environment for educating young women, Main Building or "The College," as it was originally called, was erected between 1861 and 1865. On a tour of Europe in 1845, he had written in his diary of founding an institution that would perpetuate the Vassar name while benefiting society. Among possible means to this goal, Vassar had determined by 1855 to found a women's college and had employed Thomas Tefft, a young architect from Rhode Island, to draw up preliminary plans for the college's monumental building. Tefft, whose original idea it was to unify all functions of the new college within a large, interconnected group of five units in the Romanesque style, died four years later in Italy,

and Vassar turned to the prominent New York architect James Renwick, Jr., architect of the Smithsonian. On the European tour, Vassar had been impressed with the architecture of the Palais des Tuileries; begun in 1564 by Catherine de Medicis, it had been the principle residence of Napoleon during the French First Empire and was refurbished during the reign of Napoleon III, the Second Empire. The palace was destroyed by fire in 1871, during the brief "communard" regime.

Renwick supervised the construction and landscaping of Main, and the structure was built by William Harloe, a contractor and one-time mayor of Poughkeepsie, who had proposed to do the job for $178,200. Renwick's design for Main Building, an adaptation of the popular Second Empire style, was faithful enough to its model for Vassar to pencil, after viewing it, "Similar to Vassar College" at the top of a colored lithograph of the Tuileries.

The building was designed to provide accommodations for both academic and residential life; its central pavilion provided living quarters for the president and lady principal and most of the classrooms and common rooms, its end pavilions housed the male professors and their families, while the connecting transverse links housed students in four-room suites.

President Raymond's "great pile of brick and mortar," 500 feet wide and five stories high, was thought to enclose more interior space than any other building in the country until the completion, in 1868, of the United States Capitol. Wide corridors (conceived by Vassar himself) enabled students to exercise indoors in bad weather. A boiler and gashouse 400 feet behind Main Building provided it with steam heat and gas lighting, and Vassar's letters reveal his direct involvement in getting his steam heating plant--thought to be the among first central heating plants in the country--to function. Now fitted with modern controls and supplemented with other independent systems, the original plant remains the basis for much of the system.

Until Rockefeller Hall was built in 1898, Main along with the Observatory (1864) and Vassar Brothers Laboratory (1880) was the primary place in which Vassar education evolved. In 1872 James S. Post designed an extension to the dining room and kitchen at the rear of the building, and, to provide desperately needed space for the rapidly growing library, the Frederick Ferris Thompson Annex was appended to the front of the building in 1893. Francis R. Allen, who had designed Thompson's 40-room mansion in Canandaigua, NY, was the architect for the annex. The addition, affectionately referred to as "Uncle Fred's Nose," included a marbled porte-cochere or "Soap Palace" that served as a remodeled entrance to the building. On February 12, 1918, a fire destroyed part of the rear section of Main Building, and in the subsequent restoration part of what had been the third floor chapel was incorporated in a dining room below, which was endowed by the Class of 1880 as "Underwood Hall," in memory of their classmate Jennie Cushing Underwood. A further portion of the remaining chapel space was incorporated as clerestory windows into the present Villard Room during the construction of the College Center in 1975.

Neither Post's rear extension nor Allen's annex to Main survives; in 1959, funds given by Mr. and Mrs. John D. Rockefeller III (Blanchette Hooker Rockefeller '31) allowed for the removal of "Uncle Fred's Nose" (which was generally considered an aesthetic error) and for the restoration of Main's original facade (minus the original second story entrance), and the rear extension was removed to make way for the construction of the College Center. In the summer of 1986, Main Building, already listed on the Federal Register (1974), was designated as a National Historic Landmark, in recognition of its significance as the place where a "Vassar education" started and where it was perfected.