When Ruth Crawford Mitchell was a junior at Vassar in 1910, her parents offered her the opportunity to travel around the world. Mitchell and a friend from Vassar traveled un-chaperoned to England to witness the coronation of George V, then visited Finland, Norway, Russia, Japan, and several islands in the Pacific that summer, missing a month of school. Mitchell's early exposure to international affairs was a premonition of her lifelong internationalism, which when combined with her dedication to social work, humanitarianism, and education, produced profound results. 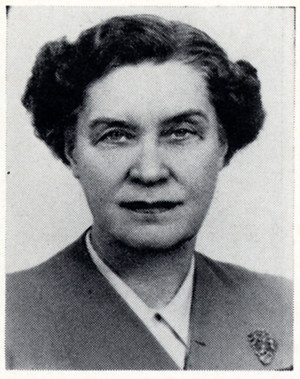 Born in Atlantic Highlands, New Jersey, in 1890, Mitchell attended the Mary Institute in her hometown and graduated from Vassar in 1912. After earning a master's degree in social work at Washington University in St. Louis, Mitchell went to work for the National Young Women's Christian Association (YWCA). There she worked on a program for immigrant girls created and run by social philosopher Edith Terry Bremer, who believed that immigrants to the United States should have the opportunity to learn English without sacrificing their culture. From 1916 to 1918 Mitchell traveled around the nation organizing three International Institutes for Foreign-born Girls on behalf of YWCA.

In 1918, Alice Masaryk, president of the Czechoslovakia Red Cross and daughter of Tomas Masaryk, the first president of Czechoslovakia, asked Edith Bremer if she knew of any trained workers in the US who could come to Prague to direct social surveys. Czechoslovakia had claimed its independence that year, and Alice Masaryk and the Red Cross inevitably faced the challenges of new nationhood. Bremer recommended Mitchell, who arrived in Czechoslovakia in 1919. Mitchell and Masaryk became great friends (Mitchell would in her later life write a biography of Masaryk). Together the women established the first school of social work in Czechoslovakia. Mitchell and Masaryk also proposed an educational exchange program where every year two Czech women would attend Vassar for two years on scholarship. Vassar President Henry Noble MacCracken enthusiastically agreed on the project, and the first Czech students arrived at Vassar in 1920.

Mitchell returned to the United States in 1922 and settled in Pittsburgh. She worked as a lecturer of sociology at the University of Pittsburgh, teaching classes on the history of immigrants and immigrant issues such as assimilation. When Mitchell asked her classes for their own genealogies, she was surprised to discover that most of her students knew little about their background. She began to take genealogical surveys and construct family trees for her students and eventually wrote a three-volume study of the origins of University of Pittsburgh students.

Around the same time, the university's 42-story Cathedral of Learning was nearing completion, and chancellor John Bowman, knowing of Mitchell's overseas experience and interest in ethnicities and cultures, appointed her to oversee the planning of the Cathedral's 'Nationality Classrooms.' Mitchell worked tirelessly, planning, raising funds, and working with architects and artists to realize nineteen 'Nationality Rooms' between 1926 and 1956. Ethnic committees in the US and abroad sponsored each classroom, decorated to celebrate the nationalities which made up the multiethnic population of Pittsburgh. The Cathedral was dedicated in 1937.

From 1944 to 1946 Mitchell traveled to Egypt as an officer for the United Nations Relief & Rehabilitation Agency. Upon her return to Pittsburgh, she established the International Student Services through the Nationality Room Scholarship program, from which she retired as director in 1956 (she was henceforth appointed its director emerita). Mitchell's commitment to intercultural education continued, albeit in a different context. From 1968 to 1978 she worked towards reviving the history of Elena Lucrezia Cornaro Piscopia, who became in 1678 the first female recipient of a doctorate degree in philosophy. Mitchell had studied under the stained glass window which commemorated Cornaro in the Vassar College library, but not much was known about the subject of the window at the time. Mitchell oversaw the reconstruction of the destroyed Cornaro Chapel as well as Cornaro's gravesite in Italy and helped with the publication of two books about her. Mitchell's work also initiated 138 celebrations commemorating Lady Cornaro across the U.S. and Europe.

Mitchell died in 1984. She had been briefly married to mining engineer Leroy Bradley Mitchell, but the couple divorced and had no children. At a Vassar Club of Pittsburgh gathering four years before her death, she commented that Vassar was her 'symptom' and longevity her ailment. Mitchell had come full circle: her deep interest in travel and interculturalism, begun while at Vassar, found its fitting finale with a salute to Lady Cornaro, another woman of great achievement.

Ziaukas, Tom. "Ruth Crawford Mitchell and the World of the Immigrant," PITT Magazine. 1981:22