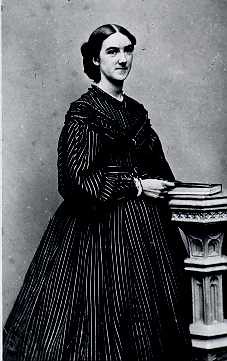 A plaque under the entrance arch of Vassar’s Blodgett Hall reads:

“Euthenics” now rings oddly in Blodgett Hall, home to the study of economics, anthropology, psychology, sociology, religion, and education. In fact most people who pass through Blodgett do not know what euthenics is, often confusing it with eugenics. Its creator, Ellen Swallow Richards, defined euthenics as the study of “the betterment of living conditions through conscious endeavor, for the purpose of securing efficient human beings.” Such high aspirations were characteristic of Richards, advocate of public health, founder of ecology, champion of women’s education in the sciences and the first professional female chemist in the nation.

Ellen Swallow Richards was born and raised on a farm in Dunstable, Massachusetts, in 1842. Having received no formal education until she was 16, she entered Vassar College at 26 as a third year student. While at Vassar, she was influenced by Charles Farrar, professor of chemistry, who insisted on the application of science on everyday household situations. Richards also came under the guidance of Maria Mitchell, professor of astronomy and activist for the advancement of women’s work in science. Mitchell saw in the diligent and bright Richards great potential for scientific innovation.

Graduating from Vassar in 1870, Richards went on to the Massachusetts Institute of Technology to continue her work in chemistry. Her entrance to MIT was not easy; many institutions turned her down on the basis of her sex, and MIT declined all women applicants except for Richards, accepting her as a special student to ascertain women’s ability in the sciences. Richards was successful at MIT, becoming the nation’s preeminent water scientist even before her graduation. Yet, writing to a friend in 1872, she was aware of her precarious position in the patriarchal field of science and education:

I hope that I am winning a way which others will keep open. Perhaps the fact that I am not a radical, and that I do not scorn womanly duties, but deem it a privilege to clean up and supervise the room and sew things, etc., is winning me stronger allies than anything else… I am useful in a general way, and they can’t say study spoils me for anything else.

Richards received her Bachelor of Science degree in chemistry from MIT in 1873. Vassar conferred on Richards a Masters in Arts upon her graduation from MIT, and her admiring MIT laboratory-mates bestowed upon her a third “degree,” in the form of an A.O.M: Artium Omnium Magistra. ("Mistress of All the Arts") The head of the chemistry laboratory, Professor Nichols, offered Richards a position as a lab assistant after her graduation, which she accepted. Richards accepted a wedding proposal from Robert Hallowell Richards, a professor of mining at MIT, in this laboratory. They married in 1875 and settled in a house in the Boston suburb of Jamaica Plains, which became a laboratory for their theories in home efficiency. In 1876, MIT opened a new laboratory for women, of which Richards became an instructor, and then head instructor in 1884. She held this position at the laboratory, which she dedicated to the study of “sanitary chemistry”, until her death in 1911.

A friend said of Richards: “…she was a woman of a few words, but she had a transfiguring touch; and her rare intellectual quality—her power of dropping a few words and transporting you to a larger world—was supplemented by a personality which commanded affection and allegiance in a remarkable degree.” The lab became a site for important scientific advancements, such as the first scientific study of water pollution and the establishment of “normal chlorine” for water quality. Richard’s work in water, air, and minerals led to the development of a study she christened Oekology, which later came to be called ecology.

Richards's greatest achievement was her founding of the home economics movement, where she was able to synthesize many of her scientific and moral interests. Lucy M. Salmon, professor of history at Vassar—herself a renowned innovator—observed: “Mrs. Richards was among the very first to realize that the home affords an opportunity for scientific investigation and she became our first great pioneer home missionary… She discovered rich veins of interest where others had seen only prosaic humdrum duties, menial service, and uninspired, uninspiring household direction.” Bringing science into the home, Richards hoped to “attain the best physical, mental, and moral development” for the family, which she believed was the basic unit of civilization. To spread the cause of home economics, Richards organized the Lake Placid Conference in Home Economics, which met yearly from 1899 to 1908. The Home Economics Association was created in 1908, with Richards as its first president.

As active outside her laboratory as she was in it, Richards served as a chemist at the Manufacturer’s Mutual Fire Insurance Company, published 17 books on home economics and sanitation—including the first health-food cookbook published in the nation—and involved herself in many public health issues, bringing reformed hygiene policies to Boston schools, organizing the first school lunch programs, and introducing inexpensive and nutritional cooking to Boston’s immigrant communities through "The New England Kitchen." Richards also prepared three exhibitions on home economics for world fairs.

Elected an Alumna Trustee at Vassar in 1894, Richards effectively advised the trustees on the issue of sewage disposal. Following her guidance, the college decided to construct an irrigation plant instead of building a costly sewage canal from the college to the Hudson River. As trustee, Richards also helped build foundations for the study of home economics and the sciences at Vassar. In 1916, the Alumnae of Vassar established a memorial fund in her honor to secure lecturers of distinction on euthenics. In 1924, with the combined efforts of one of Richards’s former students, Vassar trustee Minnie Cumnock Blodgett, chemist Annie L. McLeod, and Vassar President Henry Noble McCracken, the college’s educational experiment with euthenics began. Members of the department included advisors of chemistry, physiology, psychology, personnel research, and mental hygiene. Although euthenics never became popular as a curricular option with students and faculty, the Summer Institute of Euthenics, set up at the same time, was quite successful, becoming the center for studies in families, child psychology, child nutrition, and methods of education. Benjamin Spock and Margaret Mead were part of its faculty. Environmental aspects of the Institute (which Richards had stressed in the study of euthenics) were gradually discarded, and the Institute itself ceased operation in the 1950’s.

Richards was a lifelong advocate of women’s education and professional opportunities. She gave a lecture at Vassar in 1889 entitled “The Education and Occupations of the Twentieth Century Woman.” In 1911, the year she died, she addressed her fellow alumnae: “We have won our standing, an acknowledged place. Now that we have influence how shall we use it? Woman’s outlook will be different ten years from now. Is she still to be behind in the race? Or from her new standpoint shall she lead? The question is not woman, but ability and women.”