Blanchette Ferry Hooker was born in New York City on October 2, 1909. As the daughter of Blanche Ferry and Elon Huntington Hooker, she came from extraordinary affluence. Her mother's family owned the Ferry Morse Seed Company in Detroit, while her father was president of the Hooker Electro-Chemical Company. This inherited fortune, combined with the wealth she married into, later financed much of her philanthropy.

Like her mother, Blanchette attended Vassar College, graduating in 1931 with a degree in music. She received B's and C's, which before grade inflation marked her as a relatively strong student. She graduated as president of her senior class, and was named "the most respected" and "the most perfect lady" by the other students. One year later, she married John D. Rockefeller III in an elaborate and public marriage. The fact that Professor George Sherman Dickinson, one of her music professors at Vassar, attended the ceremony was an early indication of the continued strength of her tie to the school. 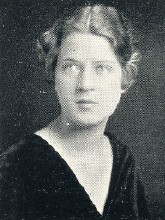 Blanchette's philanthropic interests emerged while she was still at Vassar. She wrote a paper her senior year entitled "The Individual in America," in which she argued, "Going further into the nature of liberty, there are certain essential features that are found inherently necessary to it. First, man must be economically secure… second, he must be trained to make use of his freedom to the extent that he may enjoy what he has…" Even though she came from one of the wealthiest families in the country, she believed that freedom required financial security in a way that most of the contemporary elite did not. Appropriately enough, she became the first female director of the Community Service Society of New York City in 1933, and from 1933 to 1939 served as a member of the National Board of the YWCA. During World War II, she served as a nurse's aide for two years and as a voluntary civilian defense worker.

Blanchette was also interested in the arts. She was a great collector and generous donor of modern art, and was particularly enthusiastic about the New York School in the 40's. She served as a trustee of the MoMa beginning in 1953, and as president and chair of the board on and off for many years. She also served on the New York State Council of the Arts, the National Council of Humanities, and as the Chairman of the Asian Arts Council. In the early 1950's, when her husband was appointed to John Foster Dulles’ Peace Treaty Mission to Japan, she became fascinated by Asia. Japan became a second home to her and her husband; they became close with Shigeharu Matsumoto, a politician interested in healing the relationship between Japan and the United States after the Second World War. The Rockefellers even helped to send Matsumoto's daughter, Misaou, to Vassar for several years.

Education was also a particular passion. She was, at various points, a trustee of the Brearley School and The Julliard School. In 1947, her daughter Sandra entered Vassar, which doubtlessly helped cement her ties to the school. In 1948, she was elected a trustee of Vassar College. Her eight-year term as trustee only marked the beginnings of her service to the college. Afterwards, she continued to donate money on a yearly basis, and remained in close contact with school officials. In 1956, she began to keep all correspondence with Vassar in a file, which she maintained until her death in 1992. She was on a first name basis with all of Vassar's presidents, but was particularly close to Alan Simpson. Simpson wrote her periodically, asking for her opinions about possible policy changes. He often invited her to lunch at the college, and sent her personal invitations to alumnae reunions. Blanchette, for the most part, seems to have been unable to come to most of these meetings. The other organizations she belonged to took up much of her time. But she was always willing to offer advice.

Even if she was often unable to come to Poughkeepsie, Blanchette remained involved with Vassar alumnae groups in New York City. She organized lunches and trips to the MoMa for alumnae, and even led personal tours. Other alumnae often wrote her about her about elements of current Vassar policies that upset them, trusting in her ability to influence the administration. This tendency became particularly marked during the college's most controversial debates. When the administration was considering moving the college to Yale, for example, a number of alumnae wrote to Blanchette, asking her to force Simpson to abandon the idea. Blanchette answered these demands carefully; she did not want to alienate anyone, but she refused to withdraw her support from Simpson.

She also bequeathed an extensive selection of modern and Asian art to Vassar's art gallery. Even Blanchette's liberal monetary contributions cannot compare to the Rothko, Klee, Miro, and Matisse that she gave to the art gallery. In 1981, for her fiftieth class reunion, the gallery had a large enough collection to publish an extensive booklet exclusively devoted to her donations.

Blanchette died in 1992 at the age of eighty-three, of pneumonia, a complication of Alzheimer's. In her final years, she established an institution devoted to researching cures for the disease, but continued to give generously to the college she had been involved with for all of her adult life. Blanchette's life took her all over the world, but she always remembered Vassar fondly and to this day remains one of the college's most generous donors.